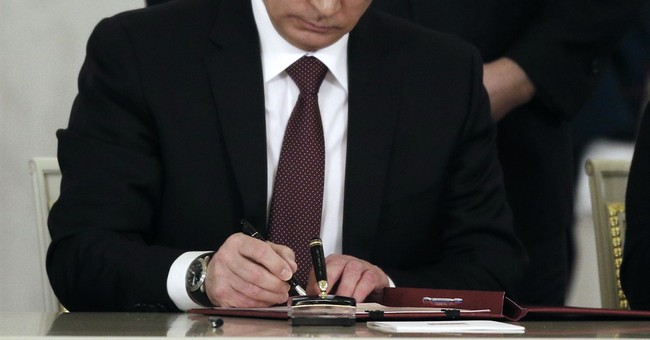 All is reportedly calm in Simferopol today after two Ukrainians were killed near the military base there on Tuesday. However, all is decidedly not calm elsewhere in Crimea. The headquarters of the Ukrainian navy were overrun on Wednesday by Russian troops and pro-Russian volunteers. No shots were fired, but the latest confrontation between pro-western Ukrainian soldiers and Russian troops is escalating tensions and setting the world on edge:

Russian troops and unarmed men stormed Ukraine's naval headquarters in the Crimean port of Sevastopol on Wednesday and raised the Russian flag in a tense but peaceful takeover that signals Moscow's intent to neutralize any armed opposition.

Russian soldiers, and so-called "self-defense" units of mainly unarmed volunteers who are supporting them across the Black Sea peninsula, moved in early in the morning and quickly took control.

In an act of defiance, Ukraine announced they would not give up their territorial claim on Crimea, despite increased Russian belligerence and aggression:

Ukraine's acting defense minister says Ukrainian forces will not withdraw from Crimea despite being largely outnumbered and increased pressure since the region was nominally incorporated into Russia Tuesday.

Meanwhile, authorities in Crimea denied entry to Ukraine’s defense minister and another official Wednesday when they tried to travel to the peninsula to defuse tensions, a Russian news agency reported, as militiamen stormed the Ukrainian navy’s headquarters and took it over.

Despite the announcement, Ukrainian soldiers were reportedly seen throwing down their arms and abandoning their posts after the Russian flag was hoisted over Ukraine’s naval headquarters:

But an hour later, Ukrainian servicemen, unarmed and in civilian clothing, began walking out of the headquarters.

Interfax Ukraine news agency said the commander of the Ukrainian navy, Admiral Serhiy Haiduk, was among those who left and was driven away by officers of Russia's FSB intelligence service. The report could not be independently confirmed.

The first group of servicemen was followed within a few minutes by a handful of troops in Ukrainian uniform, looking shell-shocked at the dramatic turn of events.

"This morning they stormed the compound. They cut the gates open, but I heard no shooting," said Oleksander Balanyuk, a captain in the navy.

"This thing should have been solved politically. Now all I can do is stand here at the gate. There is nothing else I can do," he told Reuters, appearing ashamed and downcast.

Even if the crisis should be solved politically, there is no evidence that it will be anytime soon. As we noted yesterday, Vice President Joe Biden was deployed to Eastern Europe by the Obama administration to assuage the situation and reaffirm our commitment to our NATO allies. According to the Washington Post, though, his diplomatic visit has been largely symbolic thus far -- and very short on substance, too:

But in many ways, the visit itself was the message. Even [Lithuanian President] Grybauskaite used the term “symbolic” to describe it before meeting with the vice president.

Beyond spine-stiffening pep talks - and some aspirational discussions about weaning Eastern Europe from Russian natural gas - Biden pledged very little of substance during the trip.

UN Secretary General Ban Ki-Moon will convene with President Putin this week in Moscow to convince him to resolve the situation diplomatically. To which I would say: good luck with that. If Russia is already overtaking Ukrainian military bases, his grip on Crimea won't likely be loosened after listening to entreaties and pleas from the United Nations.

Remember, Putin feels justified in annexing Crimea. Thus it won't be easy to persuade him to reverse course now.