Kerry: All Parties Agree, We Must Resolve the Ukrainian Situation With “Dialogue” 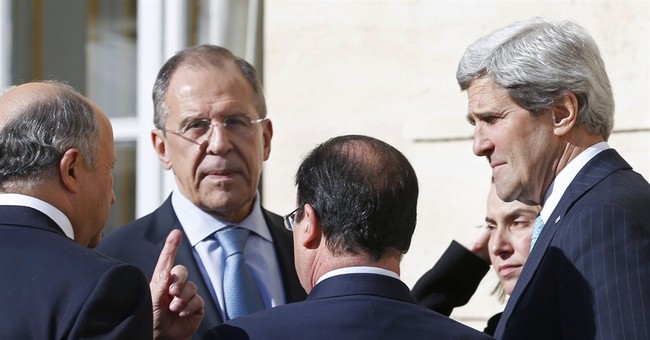 On Wednesday in Paris, France, after briefly addressing the ongoing refugee crisis in Lebanon, Secretary of State John Kerry turned to the situation in Ukraine.

“Ukrainians told me yesterday in Kiev they want a government that has the consent of the people,” he declared. And the United States, he said, stands with all Ukrainians who long for freedom, democracy, and peace.

He also announced that he met privately and individually today with both the Russian and Ukrainian foreign minister, in what he called productive and encouraging discussions.

“[Our goal is to] normalize the situation, stabilize it, and overcome the crisis,” he said. “All parties agreed today that it is important to resolve these [differences] through dialogue.”

Kerry also reiterated three steps the United States has taken to induce Russia to withdraw all of its troops from Crimea. They include suspending bilateral agreements and military cooperation exercises with Moscow, as well as halting all preparations for the G8 Summit scheduled to be held in Sochi next summer.

“Russia made a choice, and we have clearly stated that we believe it is the wrong choice,” he said. “[But] Russia can now choose to de-escalate this situation.”

“The United States is ready to work with all parties to make that happen and to [make it] happen as soon as possible,” he continued. “Ukraine’s territorial integrity must be restored and must be respected. From Lebanon to Ukraine, the United States [is standing] ready to help our friends in [their] time of need.”

“[T]oday we initiated a process that over the next couple of days, we hope, will bring about a process of de-escalation,” he said.

It remains to be seen, however, if that much-hoped-for outcome will materialize.