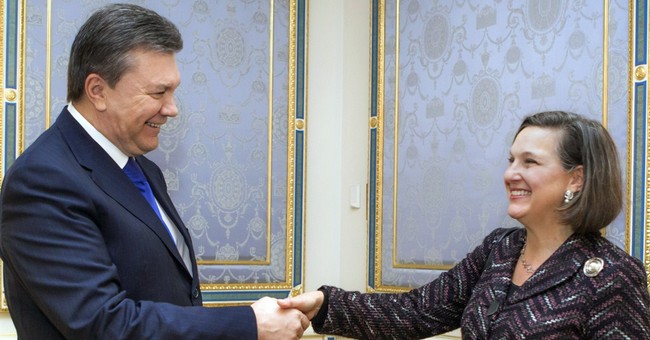 An update to my item from this morning. Sadly, in Ukraine’s capital city today, no fewer than 50 people are dead. But rather than declare more visa restrictions on government officials, the Obama administration is taking, er, more decisive action; namely, White House Press Secretary Jay Carney has released a statement:

We are outraged by the images of Ukrainian security forces firing automatic weapons on their own people. We urge President Yanukovych to immediately withdraw his security forces from downtown Kyiv and to respect the right of peaceful protest, and we urge protesters to express themselves peacefully. We urge the Ukrainian military not to get involved in a conflict that can and should be resolved by political means. The use of force will not resolve the crisis -- clear steps must be taken to stop the violence and initiate meaningful dialogue that reduces tension and addresses the grievances of the Ukrainian people. The United States will work with our European allies to hold those responsible for violence accountable and to help the Ukrainian people get a unified and independent Ukraine back on the path to a better future.

Videos of government security forces sniping unarmed demonstrators have surfaced, raising all kinds of questions about the regime’s ruthless tactics vis-à-vis cracking down on protestors (although some anti-government protestors are also armed). But perhaps even more forceful than Carney’s statement today was the president’s comment yesterday warning that “there will be consequences if people step over the line.” That is, if government forces continue massacring civilians, the U.S. might have to intervene militarily to bring stability to the country. Journalist Jake Tapper wonders why the president would use such sloppy language given what happened in Syria last year, when his ‘red line’ proclamation was crossed by Bashar al-Assad, and his administration essentially backed down. In any case, Russia is sending a peace delegation to Ukraine to try to mediate the situation:

Russian President Vladimir Putin reportedly is sending an envoy to Ukraine to try to mediate discussions with anti-government protesters – at the request of the country’s president – after violence flared up again Thursday in Kiev, leaving at least 33 people dead.

Protestors reportedly have scores of government policemen in custody. Therefore, the situation in Ukraine is completely out of control.

This is why I suspect Jay Carney's statement, however well-intentioned, won't be taken seriously by anyone, let alone the Ukrainian government.