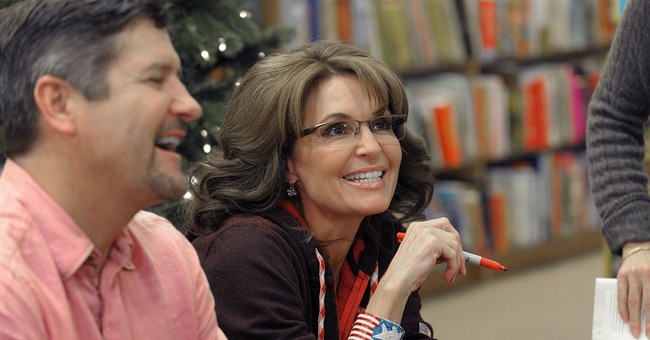 That is, according to Chuck Heath Jr. (Sarah Palin's older brother), who wrote this on his Facebook page last weekend (h/t PJ Media):

My father, who worked multiple jobs and faithfully and honestly paid his taxes for fifty years, had never heard a word from the IRS. In 2008, his daughter was tapped to run for vice president of the United States. Since that time, he has been, in his words "horribly harassed" six times by the agency. They've tried to dig up something on him but he's always operated above board.

Government and politics are ugly. Kudos to the few that are trying to clean it up.

Don’t expect the mainstream media to pick this story up, either. And by the way, even if you are very skeptical -- and don’t believe Sarah Palin’s father was targeted at all by the IRS, let alone six times -- this might pique your interest. The WSJ reported last night that it’s looking increasingly unlikely criminal charges will be filed against anyone over the IRS scandal. What? In short, we’re told, the federal bureaucrats running the agency had no idea what they were doing, or something (via Allahpundit):

The Federal Bureau of Investigation doesn't plan to file criminal charges over the Internal Revenue Service's heightened scrutiny of conservative groups, according to law-enforcement officials, a move that likely will only intensify debate over the politically charged scandal.

The officials said investigators didn't find the kind of political bias or "enemy hunting" that would amount to a violation of criminal law. Instead, what emerged during the probe was evidence of a mismanaged bureaucracy enforcing rules about tax-exemption applications it didn't understand, according to the law-enforcement officials.

Meanwhile, a lawyer representing a dozen or so Tea Party groups fired back, telling the WSJ the whole “investigation” was an incomplete, shoddy mess:

"As far as I can tell, nobody has actually done an investigation. This has been a big, bureaucratic, former-Soviet-Union-type investigation, which means that there was no investigation," she said. "This is a deplorable abuse of the public trust, but I am not surprised."

Big surprise. So the question, then, is will anyone be held accountable for explicitly targeting conservative groups and individuals for their political beliefs? Well, if there’s any validity to this report, it doesn’t seem likely.