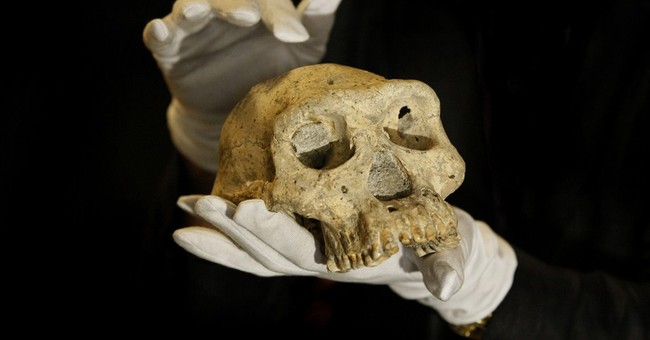 Questions about man’s existence and where he came from have been debated for centuries. Amazingly, though, the Pew Research Center recently discovered that 33 percent of Americans hold to the view that “humans existed in human form since the beginning.” That’s another way of saying 1 in 3 Americans reject the theory of evolution:

And the divide is particularly pronounced between partisan groups:

According to Pew’s figures, then, over the last four years Republicans have become increasingly skeptical of the theory of evolution. In 2009, for example, there was a 10 point gap between Democrats (64 percent) and Republicans (54 percent) in favor of the theory. Since then, the gap has ballooned to 24 points. Why? Perhaps because for some reason the vast majority of those who self-identify as white evangelicals -- a substantial GOP voting bloc -- are becoming less and less convinced man “evolved” over time?

Based on the survey, too, it’s also interesting that Americans who are “educated” -- that is to say, graduated from college or have advanced degrees -- are more inclined to support the theory of evolution. Is this why those whom do not subscribe to this view are often contemptuously maligned as “backwards,” "stupid" and “anti-science”? Parting question: Do you believe in evolution? If not, how do you account for man's existence?