Barbara Walters: “We” Really Thought Obama was "the next Messiah," or Something 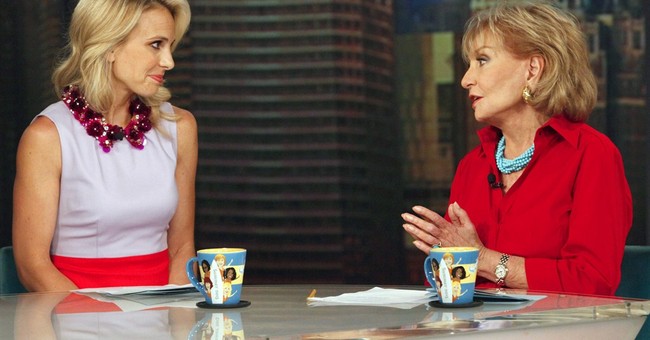 She prefaced that statement with “I shouldn’t say this at Christmastime, but…”

She said it anyway (via The Right Scoop):

“Well, you’ve touched on it to a degree. He made so many promises. We thought that he was going to be – I shouldn’t say this at Christmastime, but – the next messiah. And the whole ObamaCare, or whatever you want to call it, the Affordable Health Act, it just hasn’t worked for him, and he’s stumbled around on it, and people feel very disappointed because they expected more.”

Maybe the collective Left can be forgiven for placing all their trust in Candidate Obama. Indeed, when he was running for president in ’07 and ’08, he did make all sorts of campaign promises that the vast majority of progressives believed. They trusted him. When he later didn’t deliver on many of them, however, including the ‘if you like your health care plan, you can it’ pledge -- although, in fairness, that came later -- the Party of Change became the Party of Disillusionment. Don’t believe me? Just ask Millennials.

To be fair to Walters, I don’t think most True Leftists felt -- or feel -- Barack Obama was actually the Messiah, as evidenced by their hostility towards Christianity in general and their antics at the 2012 DNC in particular. But they all sincerely believed one man could indeed change the culture of venality in Washington, and bring “real” change to the country. He can check the box on a number of progressive causes, to be sure, but his presidency has been embroiled in controversy and scandal and, at times, marred by disappointment. Candidate Obama is not President Obama. And the Left is now finally starting to notice.