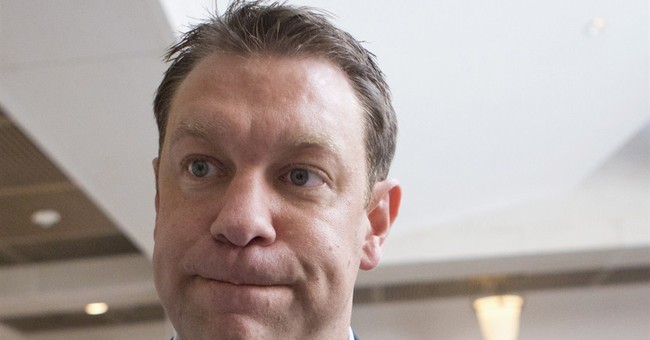 A conservative Republican from Florida who was elected with Tea Party support in 2010 pleaded guilty to misdemeanor cocaine possession charges in D.C. Superior Court on Wednesday. He received one year probation and paid a $250 fine.

USA Today also reports that a sitting member of Congress hasn’t been charged with possessing an illicit drug since 1982:

Rep. Trey Radel, R-Fla., pleaded guilty Wednesday to possession of cocaine and was sentenced to one year of supervised probation.

"I've hit a bottom where I realize I need help. And I have aggressively pursued that help," Radel said, as he admitted in District of Columbia Superior Court that he purchased 3.5 grams of cocaine.

The freshman congressman, who represents a solidly Republican district in southwest Florida, said he'll enter a rehab program. He will also pay a $250 fine on the misdemeanor charge.

Radel, 37, vowed that he will "come out of this stronger" and told Judge Robert Tignor that he wants to "continue serving this country."

I'm profoundly sorry to let down my family, particularly my wife and son, and the people of Southwest Florida. I struggle with the disease of alcoholism, and this led to an extremely irresponsible choice. As the father of a young son and a husband to a loving wife, I need to get help so I can be a better man for both of them.

In facing this charge, I realize the disappointment my family, friends and constituents must feel. Believe me, I am disappointed in myself, and I stand ready to face the consequences of my actions.

However, this unfortunate event does have a positive side. It offers me an opportunity to seek treatment and counseling. I know I have a problem and will do whatever is necessary to overcome it, hopefully setting an example for others struggling with this disease.

Please keep my family in your prayers.

He made a mistake and he’s paying for it: in the media, in his personal life, and almost certainly at the polls next year. Bottom line: elected officials can and should be held to higher ethical standards -- especially members of Congress who use cocaine themselves yet vote for legislation forcing food stamp recipients to undergo drug tests (although, in fairness, Rep. Radel did support legislation reforming mandatory minimum prison sentences). Put another way, he’s not a complete hypocrite. He wanted to give non-violent drug offenders a break.

But Rep. Radel is a sitting member of Congress with a wife and child, for heaven’s sake. And while it's unknown whether or not he'll resign (hell, if Rob Ford is still mayor of Toronto, why should he?) if and when his constituents send him packing in 2014, this will probably be a major reason why.