Video: George W. Bush is Responsible for the Government Shutdown, or Something 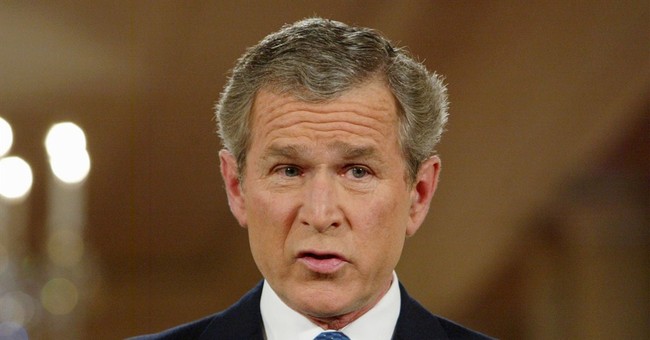 When MRCTV’s Dan Joseph presented DC residents with a simple yet straightforward question -- namely, who is more responsible for the current government shutdown, President Obama or former President George W. Bush? -- almost every single one of them said the latter. And their answers, as you might imagine, were totally compelling and well thought out.

I need not remind you that George W. Bush left office five years ago. He is not involved, much less responsible for, the failed budget talks in Washington, D.C. that led to a government shutdown. Polls show Americans fault both political parties and the current occupant of the White House for the impasse. Bush, by contrast, is a retired former president and a private citizen. Yet somehow he’s still to blame? Amazing how that works!

The “Blame Bush!” rallying cry routinely employed by leftists during the 2012 election was a useful tool used to discredit Republicans and insulate the president from criticism. It worked. But President Obama is in his second term. He’s held elective office for nearly half a decade. He’s the commander-in-chief of the United States of America, and any blame for stalled budget talks, government shutdowns or whatever should rest squarely on his shoulders. Theoretically, that is.

Granted, I realize some Americans will blame Bush for every problem we face -- no matter what. He’s Democrats’ favorite fall guy, after all. But at a certain point one has to seriously wonder if these Obama flaks are shameless partisans who actually believe what they say or just hopelessly misinformed. I suspect it’s a combination of the two.