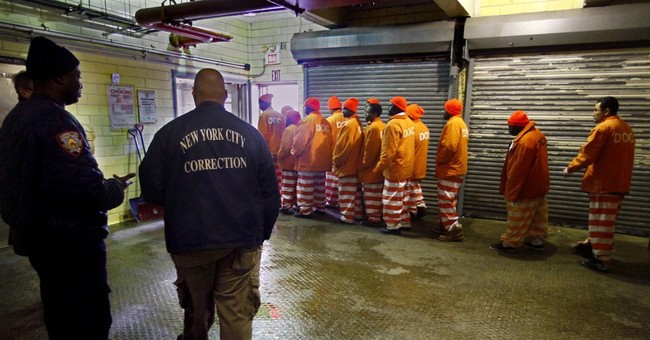 For roughly the same price of incarcerating prisoners in New York City last year, the city government could have, in theory, sent each one of them to a four year, Ivy League institution instead, according to the Associated Press. Insane:

New York is indeed an expensive place, but experts say that alone doesn't explain a recent report that found the city's annual cost per inmate was $167,731 last year — nearly as much as it costs to pay for four years of tuition at an Ivy League university.

They say a big part of it is due to New York's most notorious lockup, Rikers Island, and the costs that go along with staffing, maintaining and securing a facility that is literally an island unto itself.

"Other cities don't have Rikers Island," said Martin F. Horn, who in 2009 resigned as the city's correction commissioner, noting that hundreds of millions of dollars are spent a year to run the 400-acre island in the East River next to the runways of LaGuardia Airport that has 10 jail facilities, thousands of staff and its own power plant and bakery.

The city's Independent Budget Office annual figure of $167,731 — which equates to about $460 per day for the 12,287 average daily New York City inmates last year — was based on about $2 billion in total operating expenses for the Department of Correction, which included salaries and benefits for staff, judgments and claims as well as debt service for jail construction and repairs.

So how do New York’s total prison costs compare to other American cities? Hint: They’re much higher:

New York's system differs from other cities in some other costly ways — it employs 9,000 relatively well-paid, unionized correction officers, for example, and is required by law to provide certain services to inmates, including high quality medical care within 24 hours of incarceration.

In fairness, New York City inmates don’t appear to be living more luxuriously than, say, inmates in Los Angeles, Chicago or any other American metropolis. Why? Because nearly 90 percent of the city’s operating costs aren’t even being spent directly on prisoners; they’re being spent on staff wages and benefits. But that's only to be expected, I suppose -- especially when a giant, government-run bureaucracy also happens to be heavily unionized. Still, this isn’t to say that correction officers shouldn’t be getting good salaries and benefits -- they definitely should. But at the same time, it also doesn’t mean that the status quo is acceptable either. How could it be? Taxpayers spent nearly $200,000 per "inmate" last year in New York City alone. If you ask me, that just ain't right.