Rand Paul: “The Threshold For War Should be a Significant One” 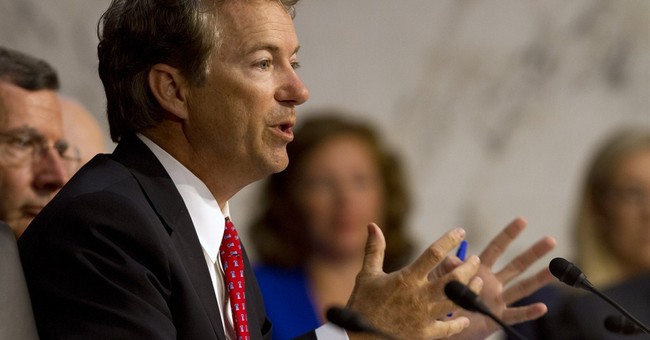 On Tuesday evening, Kentucky Senator Rand Paul responded to the president’s primetime address on Fox News. Most importantly, he argued that the Obama administration “has not made a compelling case” for war -- and that most Americans (including many members of Congress) are firmly opposed to the idea of taking military action in the region.

“Americans by a large majority want nothing to do with the Syrian civil war,” he said. “We fail to see a national security interest in a war between a leader who gasses his own citizens and Islamic rebels who are killing Christians. Some argue that American credibility is on the line, that because President Obama drew a red line with chemical weapons, America must act or lose credibility. I would argue that America’s credibility does not reside in one man.”

Furthermore, Paul argued, launching airstrikes against military compounds in Syria could have unintended and perhaps devastating consequences. He noted that once the bombing campaign starts, it’s quite possible Assad will only grow more emboldened -- and that his chemical weapons could end up in even worse hands.

At the same time, Paul also praised his anti-war colleagues -- both Republicans and Democrats -- for standing up to pro-interventionists in Congress. Without them, he argued, the tentative and yet-to-be-finalized resolution between Russia, Syria and the United States would have been impossible to imagine.

“But one thing is for certain, the chance for diplomacy would not have occurred without strong voices against an immediate bombing campaign,” he said. “If we had simply gone to war last week or the week before, as many advocated, we wouldn’t be looking at a possible solution today. The voices of those in Congress and the overwhelming number of Americans who stood up and said “slow down” allowed this possible solution to take shape.”

Finally, Senator Paul praised the President for coming to Congress and seeking formal approval before taking America to war. But, he said, under no circumstances would he vote in favor of supporting what can only be described as an unnecessary conflict.

“If the vote occurs, I will vote no and encourage my colleagues to vote no as well,” he said. “The President has not made a compelling case that American interests are at risk in Syria. The threshold for war should be a significant one.”