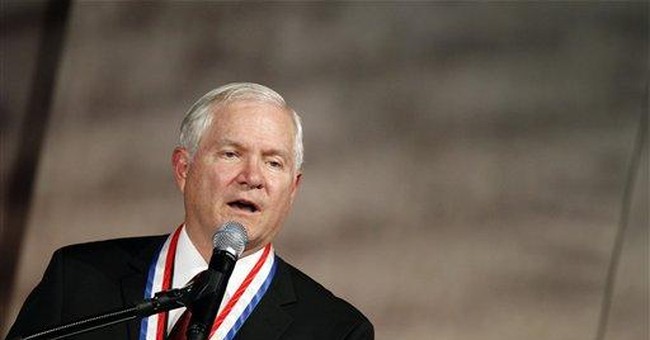 Not insignificant. Why? Because Robert Gates was the former Secretary of Defense under the current (and previous) administration. In fact, he was the only Cabinet member who stayed on after then-Senator Obama took the presidential oath of office. His opinion, therefore, carries significant weight and adds to the growing chorus of (former) high-level government officials who are coming out in favor of interventionism. Politico has the exclusive:

The endorsement from Gates, the highest level official to straddle the two administrations, will be helpful to the White House as it makes its case to lawmakers, many of whom are finding strong opposition back home to another U.S. intervention in the Middle East.

“I strongly urge the Congress, both Democrats and Republicans, to approve the president's request for authorization to use force in Syria,” Gates said in a two-sentence statement provided to POLITICO.

“Whatever one's views on current U.S. policy toward Syria, failure by Congress to approve the request would, in my view, have profoundly negative and dangerous consequences for the United States not just in the Middle East but around the world both now and in the future."

How will Gates’ opinion shape the debate in Washington? It’s difficult to say. The Fix has a tentative list of likely “yeas” and “nays” on the Syria question. Most members of Congress are of course undecided. But a solid majority of House Members also seem either vehemently opposed to the idea -- or on the fence leaning towards “no.” (Or are they?). So the question becomes: Can Team Obama rally fence-sitters (especially House Democrats) in time for the crucial vote next week?

At the very least, Gates’ statement should reassure some members of Congress that voting “no” would indeed set a “dangerous” precedent, not least because it would send the wrong message to our enemies -- essentially reinforcing what Secretary Kerry said last week. He’s got bi-partisan credentials, too, and a wealth of knowledge and experience to boot. In short, the man knows what he’s talking about. Which is why I can't imagine lawmakers on Capitol Hill aren’t paying close attention to what he has to say.