Kerry: “There is No Military Solution” in Syria 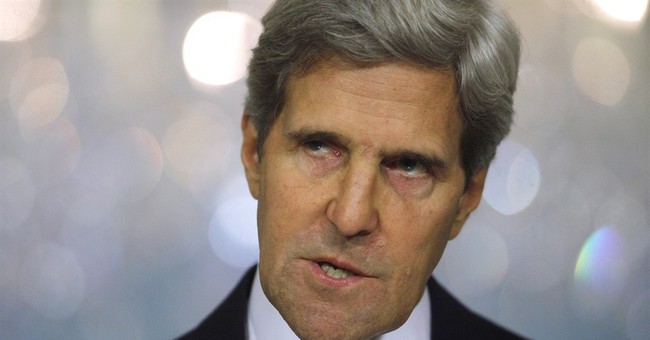 Speaking from the 7th floor of the State Department on Friday afternoon, Secretary John Kerry addressed the nation about the ongoing crisis in Syria. He failed to mention, however, what role -- if any -- the United States military will play there in the days and weeks ahead.

In any event, he spent the bulk of his remarks making the irrefutable case that the evidence “from thousands of sources” showed conclusively that chemical weapons were indeed used on the Syrian people by the Assad regime.

“I believe it is important to discuss -- as President Obama does -- this with the American people,” he said.

“We know what the doctors and nurses didn’t report. Not a scratch. Not a shrapnel wound. Not a cut. Not a gunshot wound,” he intoned. “The United States government now knows that a least 1429 Syrians were killed in this attack, including at least 426 children. Even the first responders [that] tried to save them became victims themselves. This is in the indiscriminate and inconceivable horror of chemical weapons. This is what Assad did to his own people.”

Kerry described Bashar al-Assad as a both a “thug and a “murderer.” He also said that when UN inspectors tried to gain access to where the chemical weapons were unmistakably used, the areas were cordoned off and “restricted and controlled” by the Syrian government -- thus suggesting that the government did in fact have something to hide.

“So the primary question is really no longer what do we know,” he stated. “The question is what are we in the world (collectively) going to do about it?”

Kerry then reminded the public that ever since World War I, world leaders have understood the utter destructive capabilities of chemicals weapons and that the international community had a responsibility to speak out against regimes that use them.

At the same time, however, he warned that if the United States doesn’t respond to such wanton killings, other rogue states (he explicitly mentioned Iran) would feel “emboldened” in the absence of action to pursue nuclear weapons with “impunity.”

“My friends, it matters if nothing is done,” he continued. “It matters if the world speaks up in condemnation and then nothing happens. America should feel confident and gratified that we are not alone in our condemnation and our will to do something about [this] and act.”

Importantly, he noted that the ongoing UN investigation will not determine who used chemicals weapons, only whether or not chemicals weapons were used. Regardless, Kerry added, the evidence is unmistakable that the Assad regime is solely responsible.

He finished on a more somber note.

“The American people are tired of war. Believe me, I am too,” he said with a sigh. “[B]ut just longing for peace doesn’t necessarily bring it about. And history will judge us harshly” if we fail to stand up for America’s values and interests.

“There is no military solution,” he concluded. The solution, he argued, must be “political” -- although he failed to mention of course, what, exactly, that might mean.