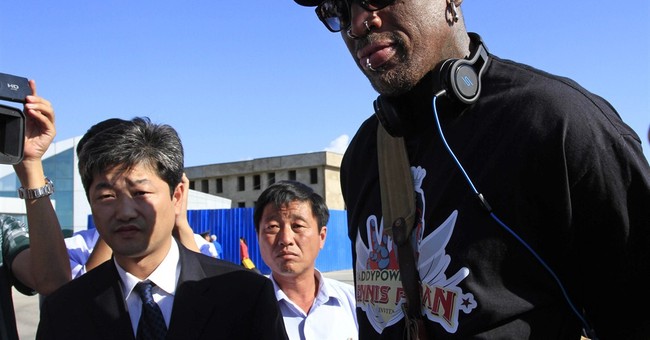 The unlikely friendship between North Korean dictator Kim Jong Un and NBA all-star Dennis Rodman is apparently better than ever. So good, in fact, that the ex-Chicago Bull is already back in his old stomping ground. This is his second visit to the People’s Republic of Korea in seven months:

Basketball Hall-of-Famer Dennis Rodman arrived in North Korea Tuesday to begin his second visit to that country this year, but the man nicknamed "The Worm" said earlier in the day he will not try to negotiate the release of an American held by Kim Jong-un's regime since late last year.

"I'm not going to North Korea to discuss freeing Kenneth Bae," Rodman told Reuters from Beijing, the traditional jumping-off point for flights into Pyongyang. "I'm just going there on another basketball diplomacy tour."

"I just want to meet my friend Kim, the marshal, and start a basketball league over there," Rodman told the Associated Press. "I have not been promised anything. I am just going there as a friendly gesture.

Rodman previously visited North Korea in late February during a time of heightened tensions on the Korean peninsula. After U.N. sanctions imposed in early March over Pyongyang's February nuclear test, North Korea threatened Washington and Seoul with nuclear and missile strikes and shut down an inter-Korean factory in the North.

So Rodman traveled all the way to one of the world’s most repressive slave states in order to help soothe U.S./North Korean relations? Call me cynical, but I suspect his second visit will go about as swimmingly as his first. Meanwhile, the state recently executed (by firing squad) the portly dictator’s ex-girlfriend for reasons that aren’t entirely clear. What did Rodman have to say about that atrocity, you ask? Well, that’s not really his concern, he told Huff Post Live:

“I don’t worry about what he does.”

Mr. Kim might not have pulled the trigger but it happened on his watch, no? In any case, the optics of this are terrible. Not as terrible as, say, Secretary of State John Kerry sitting down for dinner and drinks with Bashar al-Assad, but pretty terrible indeed. Of course, Rodman assumes he’s performing some sort of public service by extending an olive branch to one of the world’s most brutal and oppressive regimes. And maybe he will if he (somehow) secures the release of an imprisoned American. But, if you ask me, his ongoing “bromance” with the Supreme Leader is unseemly and obviously making him look foolish.