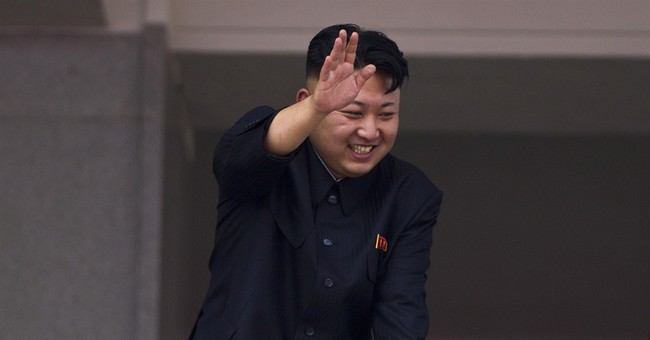 As the late, great Christopher Hitchens used to say: North Korea is a “necrocracy.” And why did he say that? Because the nation's “eternal president” (and current ruler) is...not alive. Today, however, his pudgy grandson is in charge of the country's day-to-day operations. And, apparently, this is what happens to you if you offend him:

A jarring report out of North Korea that claims Kim Jong Un's former girlfriend was executed by a firing squad last week.

Chosun Ilbo, an English language newspaper in South Korea, said unnamed sources in China told it that Hyon Song Wol (of "Electric Horse-Lady" fame) was arrested on Aug. 17 along with about a dozen others; Hyon was a singer, and a number of the others were members of the Unhasu Orchestra.

They were accused of making a sex tape and selling it and were shot three days later for violating the country's pornography laws. A source said some allegedly had Bibles in their possession, and all were treated as political dissidents.

The report has not been independently verified by other media outlets. Chosun Ilbo is one of Seoul's main daily newspapers.

Chosun Ilbo said it is unclear if Kim's wife had anything to do with the deaths; before becoming the spouse of the "dear leader" she was also in that same orchestra. Kim had reportedly known Hyon for about 10 years, and their relationship ended at the orders of Kim Jong Il, though rumors have persisted that the two were having an affair.

New York magazine said that while it's difficult to verify reports like these, the fact that it's one of South Korea's main daily papers reporting it lends it a sliver of believability.

These reports are all speculative, of course. But the rumor is that the ‘Supreme Leader’s’ neurotic wife perhaps may have had something to do with the poor girl’s untimely death -- although a South Korean newspaper insists that these reports are unverified and unsubstantiated.

Still, as if you didn’t need another reason to shake your head at the People’s Republic of Korea, apparently it’s totally lawful there to kill someone for…making a sex tape. In America, the adult film industry was once booming and, at times, can still be actually quite lucrative. In North Korea, however, engaging in this type of subversion will only get you killed. How comforting.