Poll: 54 Percent Say the GOP Should Be More Conservative 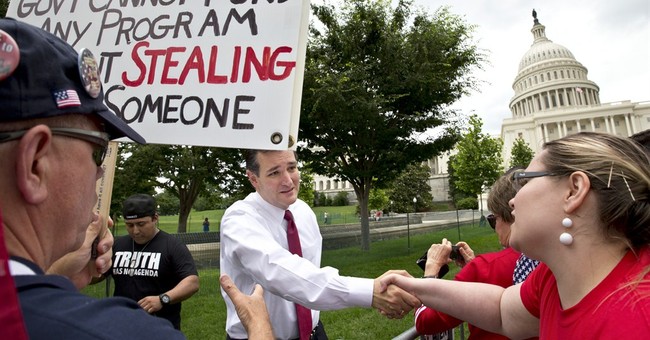 Nearly two-thirds of Republicans want their party to change its direction, and more than half say they want the party to become more conservative, according to a new poll.

When asked if Republicans just need to make a stronger case on its positions or whether it needs to reconsider some of those positions, 59 percent of GOP voters surveyed in a new Pew Research Center poll said the party needs to reconsider some policies, while 36 percent said it just needed to make a stronger case. Sixty-seven percent said the party needed to address major problems, as opposed to 30 percent who said needed changes were minor.

How the party should move, though, was more split. Just over half, 54 percent, of Republican voters said the party leaders should move in a more conservative direction, while 40 percent said they should be more moderate.

So what issues, pray tell, should Republicans move to the Left on? Well, isn’t it interesting that the only issue the Pew pollsters asked about in which more Americans said the party is “too conservative” rather than “not conservative enough” is…gay marriage? Surprise:

This might be the most divisive social issue Republicans must deal with. Of course, elected liberals (and especially Senate Democrats) are only too eager to throw away their “convictions” in order to endorse same-sex marriage. (This gross opportunism is simply amazing and would be funny if it wasn’t so pathetic). And nobody, by the way, wants to be last to “evolve” either. Even Hillary Clinton and her husband have made the obligatory “pivot” -- the latter of whom you might recall was the same guy who signed DOMA into law. Go figure. And yet it would be impossible for a left-wing pol to win the Democratic presidential nomination if he/she didn’t support same-sex marriage. On the other hand, a Republican would find it exceedingly difficult, if not impossible, to win the Republican presidential nomination if he/she did.

But there’s a problem.

The problem of course is that a sizable plurality of young people who self-identify as Republicans endorse same-sex marriage. And yes, they are the future of the party for obvious reasons, so their opinions should not be completely discounted. But it is also a fact that older Republicans (and young ones too) in great numbers define marriage as the union between one man and one woman. Alienating this important voting bloc by changing the party platform (I think we can all agree) would be political suicide in 2016 irrespective of where you stand on this issue. But the question is, where do we go from here?

Some will say the party platform must change eventually and others will say that’s a recipe for disaster -- not to mention a capitulation to the Left.

What do you say?