Pope Francis: “I Want Trouble in the Dioceses!” 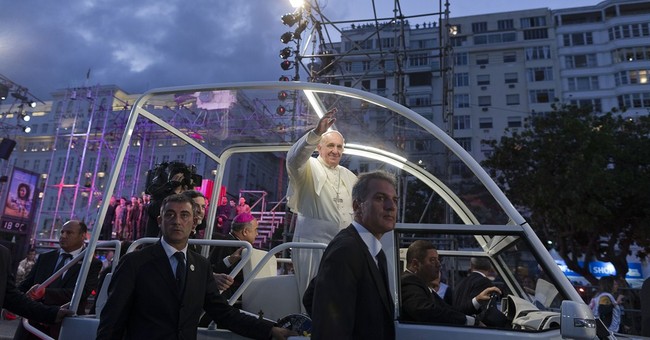 The World Youth Day celebrations have attracted hundreds of thousands of young people from all over the world to Brazil this week. But the main attraction, I think, is Pope Francis -- the recently elected pontiff who is developing quite a reputation on his first overseas trip:

Pope Francis has shown the world his rebellious side, urging young Catholics to shake up the church and make a "mess" in their dioceses by going out into the streets to spread the faith. It's a message he put into practice by visiting one of Rio's most violent slums and opening the church's World Youth Day on a rain-soaked Copacabana Beach.

Francis was elected pope on a mandate to reform the church, and in four short months he has started doing just that: He has broken long-held Vatican rules on everything from where he lays his head at night to how saints are made. He has cast off his security detail to get close to his flock, and his first international foray as pope has shown the faithful appreciate the gesture.

He's going further Friday, meeting with a small group of young convicts. He'll also hear confessions from some Catholic youth and then head back to Copacabana beach for a Stations of the Cross procession.

Dubbed the "slum pope" for his work with the poor, Francis received a rapturous welcome in the Varginha shantytown on Thursday, part of a slum area of northern Rio so violent it's known as the Gaza Strip. The 76-year-old Argentine seemed entirely at home, wading into cheering crowds, kissing people young and old and telling them the Catholic Church is on their side. …

"I want to tell you something. What is it that I expect as a consequence of World Youth Day? I want a mess. We knew that in Rio there would be great disorder, but I want trouble in the dioceses!" he said, speaking off the cuff in his native Spanish. "I want to see the church get closer to the people. I want to get rid of clericalism, the mundane, this closing ourselves off within ourselves, in our parishes, schools or structures. Because these need to get out!"

Apparently realizing the radicalness of his message, he apologized in advance to the bishops at home.

I don’t think Pope Francis is calling for all out anarchy in the streets here, of course. On the contrary, he’s trying to shake things up in the Catholic Church by encouraging the faithful to evangelize and interact with non-believers and non-Christians (as well as fellow Christians) in meaningful new ways. Indeed, Pope Francis spent many hours this past week visiting some of the poorest slums and shantytowns in Rio de Janeiro.

The truth is that the Church has long been losing parishioners to Evangelical Protestantism and other Christian sects in recent years. Thus, Francis’ pastoral outreach -- rooted in the Gospel -- is meant to remind “the least among us” that Catholics do in fact care about the poor, the neglected, the disenfranchised, and the unemployed. I’ve written recently that there’s a certain authenticity about this Pope that draws both non-believers and people of faith towards him. It’s really quite remarkable. He’s the quintessential Catholic leader in that he strives to practice exactly what he preaches.

Perhaps this is why so many Catholics (and a growing number of non-practicing Catholics) find him so inspiring.