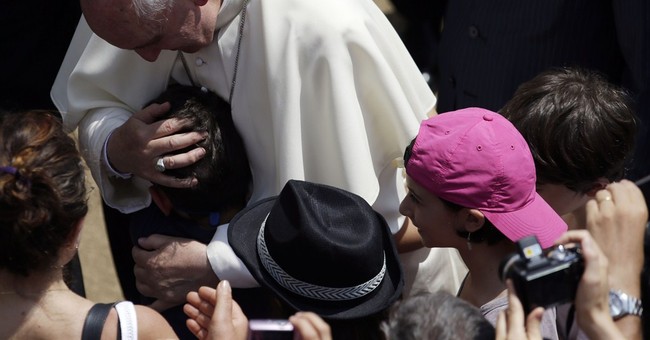 Today marks an historic moment in the life of the Catholic Church. Why? Because Pope Francis will touch down in Brazil around 3:00 PM EDT, thus kicking off his first international trip as pontiff at the World Youth Day festivities -- a week-long celebration for young people rooted in the Gospel of Jesus Christ:

The faithful, the curious and government leaders prepared on Monday to welcome Pope Francis to the world's biggest Roman Catholic country, as the pontiff travels to Brazil on his first trip abroad since assuming the papacy in March.

Francis is scheduled to land in Rio de Janeiro late Monday, having departed Rome earlier in the day for a week-long visit around World Youth Day, a massive gathering of young Catholics that is expected to attract more than 1 million people to the city and nearby sites.

The trip to the coastal metropolis, a return to his home continent by the former Argentine cardinal, comes as secular interests, other faiths and distaste for the sexual and financial scandals that have roiled the Vatican in recent years cause many Catholics around the world to leave the Church.

The visit also comes amid growing economic and social dissatisfaction in Brazil, which is still home to more than 120 million Catholics. The unease in June led to the biggest mass protests here in two decades as more than 1 million people in hundreds of cities rallied against everything from rising prices to corruption to poor public services.

The United States isn’t the only country struggling with chronic joblessness. Whole generations of young people in Europe and South America are struggling to find work as well, a global problem not lost on Pope Francis himself:

In the five months since he succeeded Benedict, Francis has pleased many with his simple style, rejection of luxuries and calls for the Church to advocate on behalf of the poor and causes of social justice. Aboard his plane on Monday, the pope told reporters the world risks losing a generation of young people to unemployment and called for a more inclusive culture.

"The world crisis is not treating young people well," Francis, 76, said. "We are running the risk of having a generation that does not work. From work comes a person's dignity."

The Pope’s presence in Rio de Janeiro is sparking organized protests presumably because of the Church’s teachings on hot social issues such as marriage and abortion. (Indeed, twenty thousand police officers and security personnel have been deployed to protect him and keep the peace). But, according to Reuters, Brazil’s government is hoping increased security measures are merely precautionary given the Pope’s humility, compassion, and sincere love and abiding commitment to the poor. As I wrote last week, the Pope’s explicit rejection of materialism and consumerism gives him a certain aura of authenticity as the top evangelist for the Catholic Church -- an organization long marred by scandal, abuse, and corruption. If anything, Francis seems to have a keen understanding of the problems facing young people everywhere, especially those facing crushing poverty and unemployment. So don’t be too surprised if the crowds that turn out to greet him this week exceed Brazil’s earliest predictions. There’s a very good chance they will.