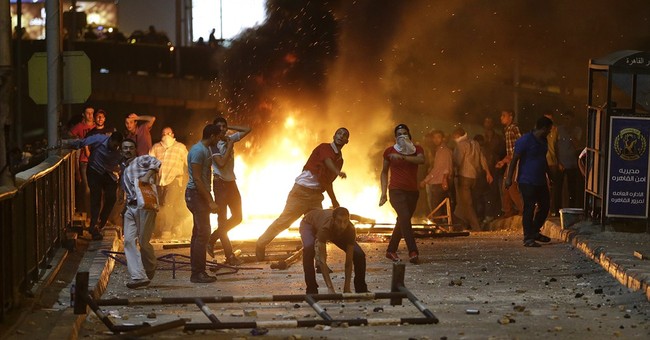 Ever since Egyptian President Mohammed Morsi was ousted from office earlier this month, the U.S. government was obviously hoping for a relatively peaceful transition of power and a return to “real” Democratic institutions sometime in the foreseeable future.

Unfortunately, that kind of wishful thinking is proving impossible:

Khaled el-Khateeb, the head of the Health Ministry's emergency and intensive care department, said another 261 people were injured in the clashes that broke out late Monday and carried on into the early morning hours of Tuesday in four different locations in Cairo.

Egypt's state news agency said 17 policemen were injured in the violence, and 401 people have been arrested in relation to the clashes.

There was no official word on how the seven people died, but security officials said four of them were killed in clashes between Mohammed Morsi supporters staging a sit-in near the main Cairo University campus and residents of the area. The officials spoke on condition of anonymity because they were not authorized to speak to the media.

Thousands of supporters of Morsi, the former president who was overthrown by the military on July 3, were protesting to demand that Morsi be reinstated.

At a news conference, Burns attempted to emphasize that the U.S. government is not taking sides in the conflict, saying, "It is not our business, as Americans, as outsiders, to support particular political personalities or particular parties. That's the business of Egyptians. What we will continue to try to do is to support and open, inclusive, tolerant, democratic process which is going to be the only way to build broad popular confidence in the sorts of institutions that are the aim of the revolution,” Burns told reporters at a news conference.

It’s going to be incredibly difficult for the United States government to play a meaningful role in fostering an “open, inclusive, tolerant, and democratic process” in Egypt when Christians are continually being slaughtered and targeted for their political beliefs, women are sexually assaulted and gang raped, and innocent lives are senselessly lost. But Burns is right. It’s not up to the United States government -- or the American people, for that matter -- to establish Democratic institutions in Egypt; it’s up to the Egyptian people themselves. But a return to normalcy and universal respect for the rule of law is the first step in that all-important process.

The billions of dollars in aid we’re continuing to send them should help, even though a new poll out today shows that the vast majority of Americans want "nothing to do with Egypt."