Why Did Gabriel Gomez Lose? 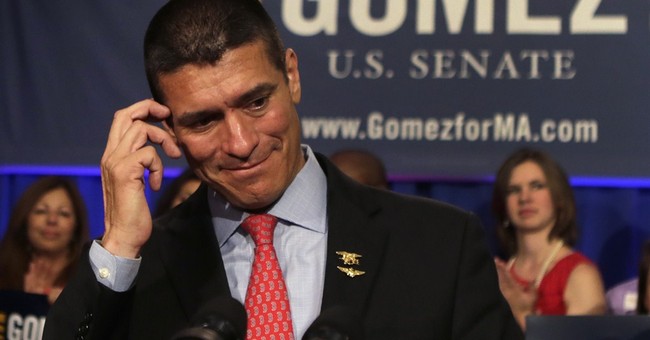 The vacated U.S. Senate seat in Massachusetts was eminently winnable, according to Republican strategist Curt Anderson, but there was one major problem: GOP donors sat on the sidelines.

Let’s be clear, this was a winnable race. The Democrat candidate, Congressman Ed Markey, ran a lackluster campaign that inspired no one. His 37 years in Congress made him the poster boy for term limits, he has 271 votes to increase taxes, he barely showed up on the trail, and he is to the left of the average voter in Massachusetts. In short, he was a worse candidate than even Martha Coakley.

As it turns out, Republicans had the perfect candidate in Gabriel Gomez. New to politics, son of immigrants from Colombia, bilingual, Naval Academy grad, Navy pilot, Navy SEAL, successful businessman. He started out green, but was a remarkably quick study, and depending on your view, either won the debates against his veteran opponent, or at worst, held his own in the first two and won convincingly in the final debate.

Oh, and not only is Gabriel a Latino success story he’s exactly what many of the major donors in the Republican world claim they desperately want – a moderate on social issues. He supports gay marriage, he supports the Toomey-Manchin gun control bill, he supports the Gang of 8 immigration reform proposal, and he even calls himself a “green Republican.”

Only one problem, those moderate Republican major donors who love to complain did not show up to defend this candidate and try to win this election. The total spending from the Democrat side dwarfed the spending on the Republican side. There was one notable exception; some fellow from California named John Jordan did spend more than a million dollars on an independent expenditure campaign promoting and defending Gomez.

Meanwhile, the left was there in a big way, spending more than 4 million dollars in the final three weeks savaging Gomez, and that’s merely the part we know about. The real number was certainly much more than that.

I’m not sure I agree with Anderson that Martha Coakley was a stronger candidate than Ed Markey, but he wasn’t much better. In any case, aside from hailing from the Bay State, Markey and Gomez had little in common: Gomez was young and charismatic and had a compelling life story; Markey, by contrast, at times looked like he was ready for retirement. Nonetheless, Gomez still lost by double digits. This is particularly frustrating because -- as Anderson points out -- Gomez is a candidate the GOP establishment would love to elect to high federal office. And yet rich social moderates -- many of whom worry the Republican Party is becoming “too conservative” -- didn’t think investing in one of their own was worth the risk? Frustrating.

On the other hand, I understand why conservatives generally wouldn’t want to give money, much less their time, helping to elect a squishy RINO to the United States Senate. That's understandable. But even though Gabriel Gomez supports “comprehensive immigration reform” and gun control, he’s still a fiscal conservative. As noted above, Ed Markey voted to increase taxes 271 times over his decades-long career in the House. And guess what: he’s going to continue to do the exact same thing in the Senate! Think about it this way, would you rather have a fiscal conservative with moderate to left-leaning views on social issues representing the Commonwealth in Washington -- or Ed Markey, a guy who will vote lock-step with his party every single time to advance the president’s progressive agenda? This choice was crystal clear.

Too bad Republicans didn’t get involved in this race when they could have. Ed Markey won, and now, it seems, the party has no one to blame but themselves.