Pelosi Praises Obamacare: “The Implementation of this is Fabulous” 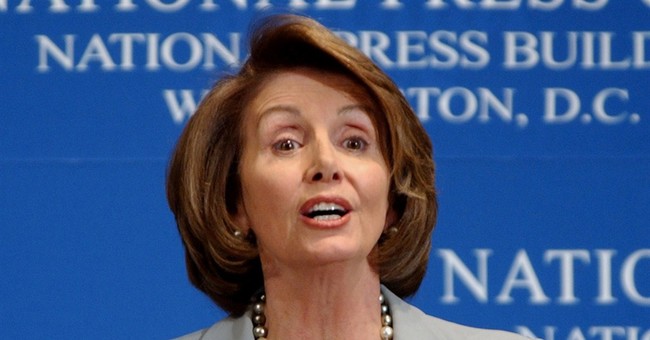 I suspect one of the law’s chief salesman -- you know, the same Democratic Senator who said Obamacare’s rollout was going to be “a huge train wreck” -- probably disagrees. Just a hunch:

Congressional Democrats told Health and Human Services Secretary Kathleen Sebelius on Wednesday that Americans are still very confused about the health care law — including older people who worry that Obamacare will change their Medicare.

Sebelius went to the Hill for another update with Democrats on Obamacare rollout. HHS this week overhauled its website, focusing more on the exchange enrollment, which starts Oct. 1.

“The implementation of this is fabulous,” Pelosi said. “As we observe the Fourth of July, our founders talked about the Declaration of Independence guaranteeing life, liberty and the pursuit of happiness — that is what this is all about.”

It always amazes me how Democrats unfailingly and shamelessly invoke the Founding Fathers whenever they need to push their radical left-wing agenda. This is a case in point. “If Thomas Jefferson was alive today,” I almost imagine Pelosi saying to her incredulous supporters, “he would have supported the Affordable Care Act.” Laughable. But setting aside the fact that the Founders never would have hope for, let alone supported, a federal government as unwieldy, incompetent, and inefficient as it is today, Pelosi’s comments are patently false. Obamacare is already forcing employers to cut workers’ hours and slash wages. Why? Because small businesses simply cannot afford to cover their employees’ health care costs under the law's stringent regulations. Meanwhile, doctor shortages are also expected (as many as 70,000 by 2020, according to some estimates) and the final price tag is more than double what the president and his allies said it would be. In other words, how Pelosi could possibly use the word “fabulous” when describing Obamacare’s implementation is beyond me. After all, there’s a reason why zero Republicans voted for it, and what’s more, why Congressional Democrats are growing steadily nervous about next year’s mid-terms elections. Simply put, Pelosi is either lying through her teeth here -- or woefully misinformed. I’ll let you decide.

Oh, and by the way, since the government agency that explicitly targeted conservative groups will now play a “dominant role” in the law’s implementation, Americans should rest assured everything will be A-OK. Gulp.