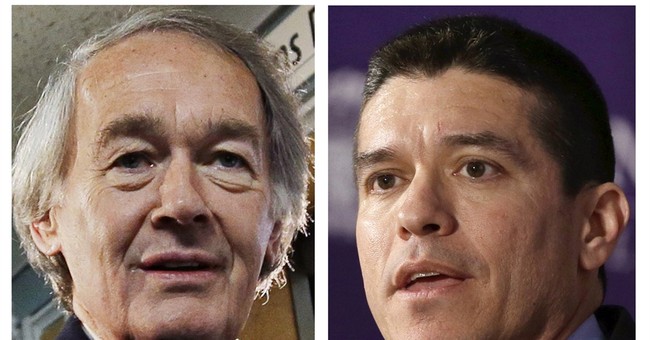 Mud-slinging, character assassination, and below-the-belt cheap shots are staples of American politics; after all, just look at what’s happening in Massachusetts these days:

As outside groups begin to mobilize in the Massachusetts Senate race, the animosity between the Republican Gabriel Gomez and his Democratic opponent, Rep. Ed Markey, is reaching a fevered pitch.

The increasingly personal nature of the attacks could soon be amplified as outside money begins to pour into the race before the June 25 election.

Reacting to negative television ads on Thursday, Gomez angrily referred to Markey as “pond scum,” elevating a line of attack from his campaign that also branded the Democratic congressman as “Dirty Ed Markey.”

Gomez’s campaign downplayed the "pond scum" comment and told The Hill the remarks were unscripted. An aide noted that the candidate is a “plainspoken Navy SEAL.”

“We're surprised at the controversy,” a Gomez aide said. “Pond scum has a higher approval rating than Congress.”

Gomez made the remarks while criticizing recent ads run by his opponent: One highlighted Gomez’s opposition to restrictions on high-capacity ammunition magazines while invoking the Newtown school shootings; the other showed a picture of Gomez alongside one of Osama bin Laden.

Unlike the Brown/Warren agreement during the last election cycle, Gabriel Gomez famously (and shrewdly, I might add) refused to sign the “People’s Pledge” -- a contract between political campaigns in which outside money and partisan groups are essentially banned from influencing state elections. As a result, the ad hominem attacks are expected to grow increasingly more venomous in the weeks ahead:

“When the candidates run the ads, they go only so far with your face and your name behind it. Now without any protection from those outside groups, you are going to see real hard-hitting ads, unless the candidates themselves call them off.”

According to reports, the National Republican Senatorial Committee is sending at least four staffers to the state to help with strategy and fundraising on Gomez’s campaign.

However, two of the highest spending super-PACs, Majority PAC on the left and American Crossroads on the right, have remained noncommittal about their decision to enter the race.

Currently, Gomez is trailing his opponent by double digits. But because turnout will likely be low -- after all, this is a special election in the summer and Barack Obama isn’t on the ballot -- it’s nearly impossible to predict (particularly by means of early polling) who the winner will be. This at least gives Gomez a fighting chance to reclaim a U.S. Senate seat long-held by Democrats since the Reagan era. Simply put, he has 31 days to make his pitch to voters. Can he pull it off in time, or will this seat, inevitably, stay blue as most political observers expect? We’ll see.