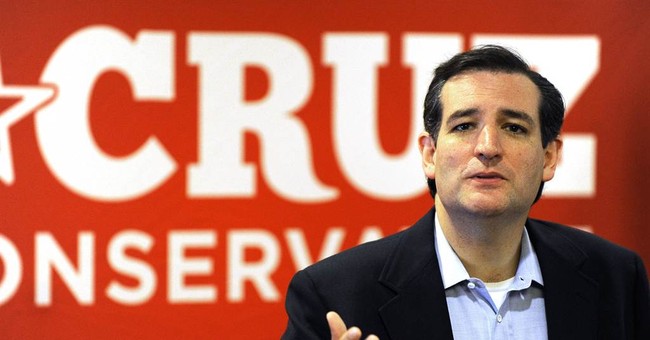 After Ted Cruz got elected to the United States Senate last November I had a suspicion that we’d inevitably see a story like this in the not-too-distant future. Turns out I was right; I just didn’t expect to read it so soon (via NRO’s Robert Costa):

Freshman senator Ted Cruz is considering a presidential run, according to his friends and confidants.

Cruz won’t talk about it publicly, and even privately he’s cagey about revealing too much of his thought process or intentions. But his interest is undeniable.

“If you don’t think this is real, then you’re not paying attention,” says a Republican insider. “Cruz already has grassroots on his side, and in this climate, that’s all he may need.”

“There’s not a lot of hesitation there,” adds a Cruz donor who has known the Texan for decades. “He’s fearless.”

Cruz, for his part, now joins a long list of conservative and Tea Party types mulling president runs in 2016. Marco Rubio, Rand Paul, Bobby Jindal -- just to name three -- seem to be at the top of the list. However, if Cruz does officially enter the race, he could shake up the primaries in new and exciting ways, not least because he’d almost certainly be considered the most conservative candidate vying for the nomination. From the NRO article:

That ideological purity and Cruz’s presidential maneuvers make aides close to other Republican contenders nervous. The backroom Republican consensus is that a Cruz insurgency would hardly be a quixotic publicity stunt. He’d outflank almost all of the other candidates on the right, and his debating skills, which once won him national awards, would be formidable. It doesn’t hurt that much of the media already hates him with a passion.

It’s probably a good rule of thumb to remember that the more the media hates you, the more conservatives will support you. Costa, meanwhile, also notes that in many respects Cruz would be a “Barry Goldwater type” -- that is, a candidate who would challenge and shake-up “the establishment” -- and therefore hopefully usher in a new, 21st century conservative political awakening. But because of his close-knit ties to political financiers such as Peter Thiel, for example -- and, as noted above, his exceptional debating and speaking skills -- he’d be a formidable contender. So while it’s only 2013, and the prospect of a Ted Cruz presidential run is perhaps years away, it should not be taken lightly. This guy might run.