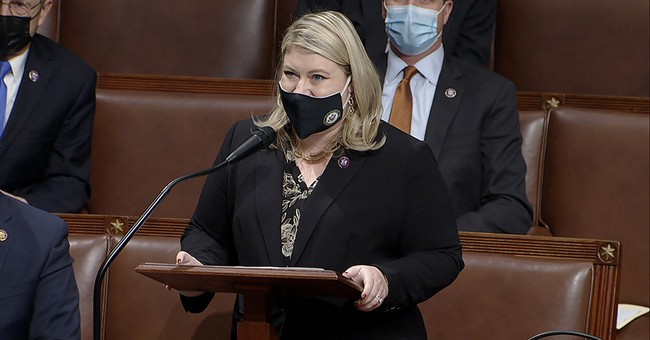 Rep. Kat Cammack (R-FL), who is the wife of a first responder, slammed her husband's SWAT vest on the table as she began her speech on the House floor on Wednesday to speak out against the Democrat-led George Floyd Justice in Policing Act. The measure, which passed the House by a vote of 220-212, would, in part, ban chokeholds and end qualified immunity, which protects officers from certain lawsuits.

"This the same vest that he wore for 14 hours while on a massive manhunt for a man who had just been released from prison who promptly raped and killed his girlfriend," Rep. Cammack said, pointing to her husband's SWAT vest.

This is just one of the dangerous scenes this vest and her husband have seen over the years. But she says that pales in comparison to what the Democrats have just passed.

"But the real threat here is not the dangerous situations my husband has seen in protecting his community...it is the fact this bill would take this vest off my husband's back," Cammack said. "What this bill does is take this kind of equipment off the backs of our men and women in uniform."

Derek Chauvin, the officer responsible for George Floyd's death, should "never" have donned the badge, she noted.

"He should, and is being held responsible," she said, adding, "There is absolutely nothing that a good cop hates more than a bad cop."

But this bill, she said, will not solve the problem.

She asks those voting for the bill, "Are you waking up at 2 a.m. going to respond to a gruesome murder? Are you missing your kids' birthday parties to respond to gang shootings?"

The answer, she says, is not to defund the police, which she says is what this measure will do. And her conservative colleagues agree.

“The Democrats’ Justice in Policing Act poses a grave danger to law-abiding police officers, as it would eliminate qualified immunity protections, lower the standard for federal civil rights lawsuits, and limit access to necessary equipment during emergencies and natural disasters,” Rep. Elise Stefanik (R-NY) said in a statement.

“Democrats rushed this bill to the House Floor without accepting any input from Republicans, expert testimony, or significant data," she added.