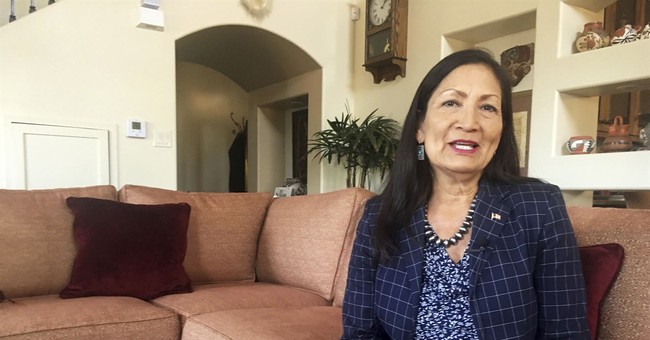 At the confirmation hearing for Interior Secretary nominee Debbie Haaland on Tuesday, ranking member Sen. John Barrasso (R-WY) listed off the thousands of jobs that President Biden is about to kill with his decision to hit pause on new oil and natural gas leases on federal lands. The senator noted that the temporary ban is estimated to cost 62,000 jobs in Haaland's home state of New Mexico, 33,000 in his state of Wyoming, as well as several more thousand in the states represented by other panelists on the Energy and Natural Resources Committee.

Defending his decision, President Biden argued that his administration is going to "create jobs" in other areas, such as the auto industry, agriculture and manufacturing. That made Barrasso wonder, why couldn't they "just let these workers keep their jobs?”

"Senator, it's my understanding that President Biden has put just a pause on new leases," Haaland replied on Tuesday. "He didn't ban new leases. He didn't put a moratorium on new leases. It's a pause to review the fossil program, the federal fossil fuel program."

.@SenJohnBarrasso to Biden Interior nominee Deb Haaland: “why not just let these workers keep their jobs?”pic.twitter.com/hZUIWqh5mt

She did not agree to advise the president that a "permanent ban" would be unwise, only telling Sen. Barrasso that she'd pledge to work with him to "create jobs."

A study from the Wyoming Energy Authority estimated that "hundreds of millions of dollars in investment and thousands of jobs in Colorado would be lost within a single year" as a result of the Biden administration's pause.

Biden's decision to stop the construction of the Keystone XL Pipeline is also estimated to cost thousands of jobs. Sen. Steve Daines (R-MT) made an interesting point to the nominee on Tuesday. By nixing the Keystone, the supposedly environmentally concerned president may have just increased carbon emissions.

.@SteveDaines: One of the ironies is these executive actions are actually going to increase emissions not decrease... The Keystone Pipeline was a zero net carbon project by 2030.

How do we address the increase in emissions caused by President Biden's actions?