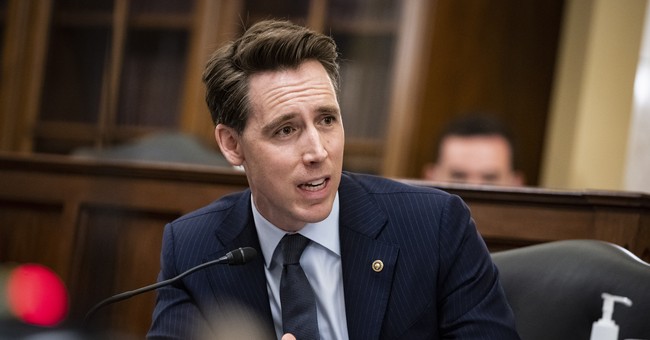 Sen. Josh Hawley (R-MO) is among the conservatives who are concerned about President-elect Biden's plan to grant amnesty to millions of illegal immigrants living in the U.S., particularly at this time of "economic distress." Any illegal immigrant living in the U.S. as of January 1 is eligible to a 5-year path to temporary legal status, followed by a 3-year process to naturalization. And DREAMers, individuals who were brought to the U.S. illegally as children, can immediately apply for green cards.

And so when Sen. Hawley had the chance to question Alejandro Mayorkas, Biden's nominee for Homeland Security Committee, at Tuesday's Senate Homeland Security Committee hearing, he demanded to know if the nominee supported that kind of mass amnesty. Mayorkas previously served as the head of U.S. Citizenship and Immigration Services during the Obama years, before serving as deputy secretary of DHS.

Sen. Josh Hawley to Homeland Security Sec.-nominee Alejandro Mayorkas: "[Biden] intends to propose as early as his first day in office, so tomorrow, a plan for amnesty to up to 11 million illegal immigrants... Do you support mass amnesty on that scale?" pic.twitter.com/5tPbJmBAnu

Mayorkas gave a general answer arguing that Biden's immigrations plan will fix a broken immigration system. He echoed Biden's belief that illegal immigrants who have lived here for years and contributed to our communities deserve a path to citizenship. Mayorkas said he would be "privileged" to work with Congress to pave that path.

Hawley also asked the nominee about his plans for the border wall. Under President Trump, the US Customs and Border Protection say they've completed 453 miles of the structure.

Democrats wanted to fast track the confirmation of Mayorkas because of the recent Capitol Hill riots. But Hawley, dissatisfied with the nominee's answers, told the panel that at this time he will object to a quick vote in favor of his confirmation. So the nominee will have to wait.

“Given this, I cannot consent to skip the standard vetting process and fast-track this nomination when so many questions remain unanswered," Hawley said.