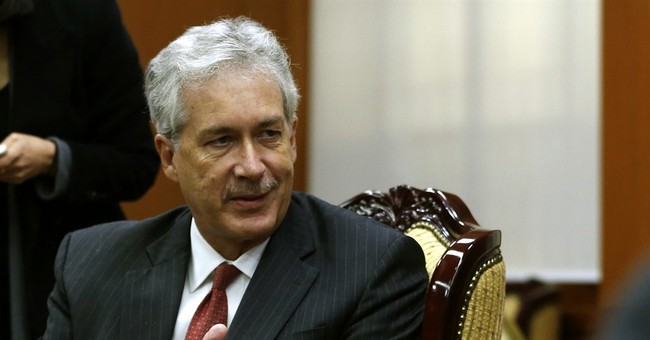 President-elect Joe Biden has announced that he's nominating former Deputy Secretary of State William Burns to be his CIA director, replacing Gina Haspel, who was the first woman to run the agency.

"Bill Burns is an exemplary diplomat with decades of experience on the world stage keeping our people and our country safe and secure," Biden said in a statement. "He shares my profound belief that intelligence must be apolitical and that the dedicated intelligence professionals serving our nation deserve our gratitude and respect. Ambassador Burns will bring the knowledge, judgment, and perspective we need to prevent and confront threats before they can reach our shores. The American people will sleep soundly with him as our next CIA Director.”

In an Atlantic op-ed last year, Burns commended the Trump administration for the "breakthrough toward normalized relations between Israel and the United Arab Emirates is a significant achievement." But that's about the only nice thing he had to say about Trump's foreign policy, which he referred to as "corrosive." He took particular issue with Trump's behavior toward Iran and China. Burns also predicted that Trump would be uncooperative during the transition if he lost the election.

Democrats who blame Trump for the violence are planning to try a second impeachment effort this week. Asked about the Democrats' agenda, Biden told the press that Congress will do what they will, but he's focused on COVID legislation. He added that lawmakers should be ready "to hit the ground running" to work with him on it.