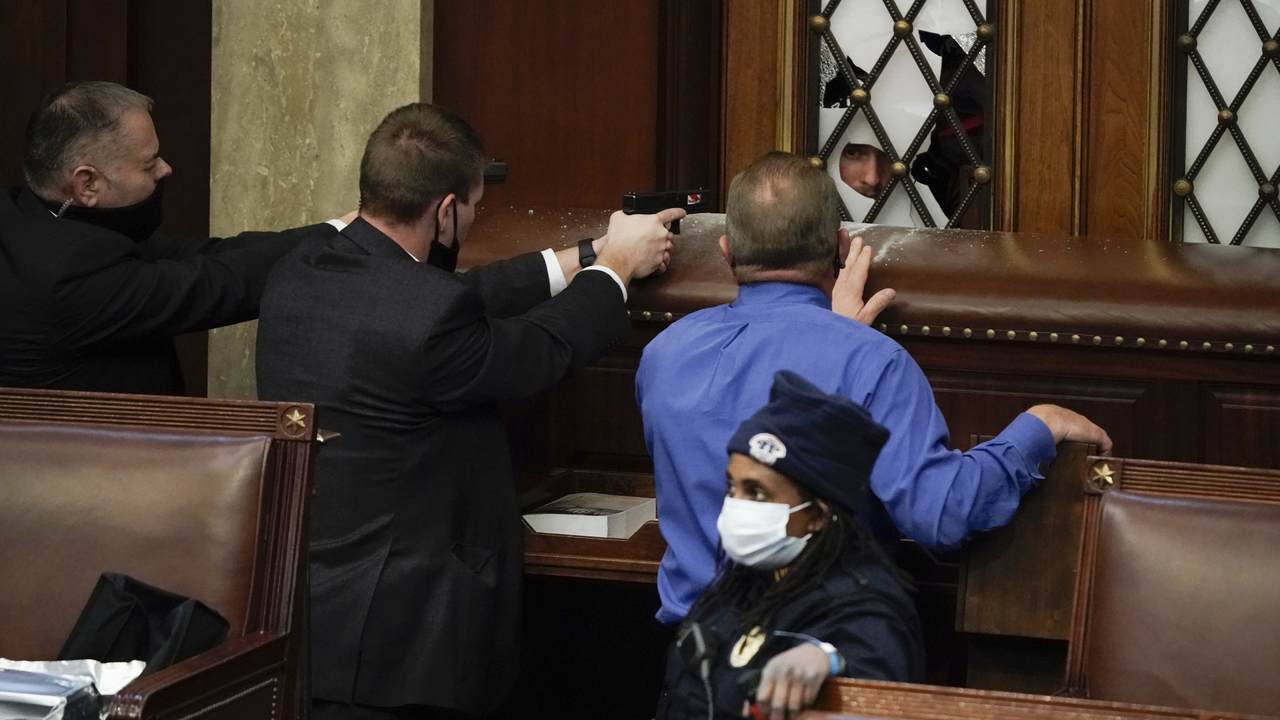 On Wednesday night, after Congress reconvened after an hours-long, and at times frightening, interruption by a protest that made its way inside the Capitol, GOP Leader Kevin McCarthy led the House of Representatives in a standing ovation for the brave Capitol Police officers who protected them and "did their duty with confidence and strength." Tragically, four people are dead in the wake of the chaos. But McCarthy and the rest of the chamber agreed they had to continue the electoral college certification to show the mob that it won't interrupt their duty.

McCarthy said some of their colleagues also deserve their thanks. He singled out a handful of lawmakers who helped "hold the line" and protect the House chamber.

"It extends to this chamber - where both Democrats and Republicans showed courage, calm, and resolve," he said. "I’d like to recognize the members now who helped to hold the line: Markwayne Mullins. Tony Gonzalez. Jason Crow. Pat Fallon. And Troy Nehls. Working with Capitol Police, they ensured the floor of this chamber was never breached. These are heroes among us."

"And in my hand, is a symbol of their actions - a part of a hand sanitizer station that Rep. Mullin used to help defend the chamber," McCarthy continued. "Markwayne, I’d like to give this to you now to commemorate your heroism today. These are the heroes who made sure this chamber was never breached."

HEROES: 5 men are being credited for "holding the line" as violence erupted at the Capitol today.
Three are from the Lone Star State.

Below is a photo of Rep. Nehls, a former Fort Bend Co. sheriff, standing side-by-side with Capitol Police as the intruders tried to break into the chamber. He reportedly tried to negotiate with the mob.

I was proud to stand shoulder to shoulder with Capitol police barricading entrance to our sacred House chamber, while trying to calm the situation talking to protestors.

What I’m witnessing is a disgrace. We’re better than this. Violence is NEVER the answer.

Rep. Gonzales explains below how "proud" he was to stand with a few of his fellow freshmen congressmen to help the police barricade the doors. He says they broke off pieces of furniture to secure the entrances and keep the protesters at bay. He also recalls that the protesters threw some sort of projectiles at the windows.

I was proud to join @RonnyJacksonTX, @FallonforTexas, @SheriffTNehls, and the incredible Capitol Police to defend the People's House today. This is a country where the rule of law comes first. We will never bow to the mob. pic.twitter.com/T00jp8Qymt

And I'm sure the list of heroes doesn't end there. Watch the GOP Leader's full speech below.

"By returning here to complete the work we were sent to do, we are proving that our democracy cannot be disrupted by criminal behavior," McCarthy declared. "We will not falter. We will not bend. We will not shrink from our duty. Mobs don’t rule America - laws rule America. It was true when our cities were burning this summer, and it’s true now."