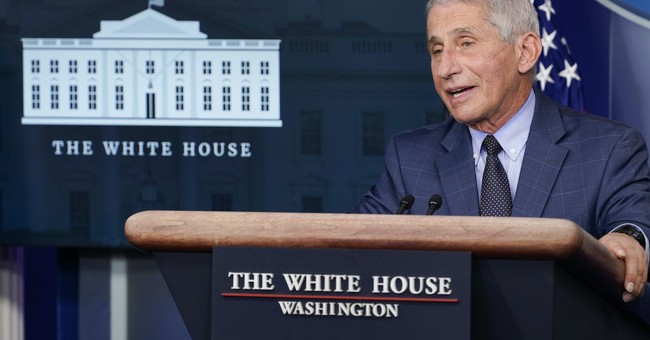 The bromance has begun. And it's one we probably should have expected. On his press conference call with Dr. Anthony Fauci on Monday, New York Gov. Andrew Cuomo referred to the two of them as, "the modern day De Niro and Pacino."

Fauci praised Gov. Cuomo for what most others have criticized him for - his draconian lockdowns. Ahead of Thanksgiving, Cuomo ordered bars and restaurants to close indoor and outdoor dining nightly at 10 p.m. And he limited private gatherings to just 10 people, meaning families had to make some cuts from their holiday guest lists.

In their conversation, however, Fauci suggested that 10 people “may even be a bit too much."

“It’s not only the number...but it’s the people who might be coming from out of town," Fauci explained.

Fauci and Cuomo talked regularly throughout the pandemic. A question that hasn’t been answered—did Fauci advise Cuomo against putting COVID positive patients in nursing homes? If not, why? pic.twitter.com/dWnLFDIvGb

“Without substantial mitigation, the middle of January could be a really dark time for us,’’ Fauci warned.

Cuomo suggested that he and Fauci should do an ad together encouraging people to take the eventual coronavirus vaccine. However, Cuomo is one of several Democrats questioning the safety of the vaccines developed under Operation Warp Speed and even threatened to block the distribution of them.

The governor has also denied any accountability when it comes to the tragic number of nursing home deaths in New York, despite his March 25 mandate ordering nursing homes to accept recovering COVID patients. All the while, he's been hawking his self-congratulatory book about leading during the pandemic.