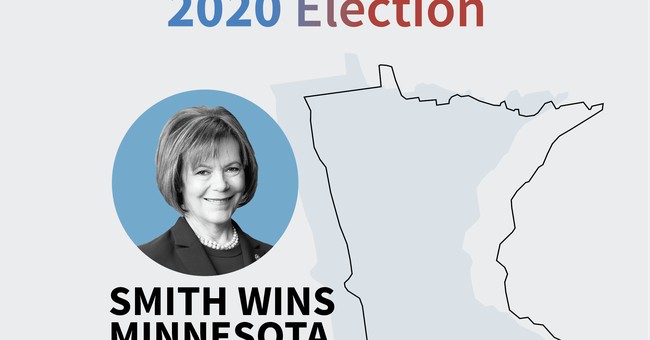 Democrat Minnesota Sen. Tina Smith has defeated Republican challenger Jason Lewis, a former congressman, the Associated Press is reporting. Earlier in the night, Lewis tweeted that the race was neck and neck. But Smith pulled ahead. With 90 percent of the vote in, Smith is currently up by 49.1 percent to the Republican's 43.2 percent of the vote.

Thank you, Minnesota. You showed up to say YES to lifting up the best of who we are, to continue working together and make progress. I’m ready to keep doing the work with all of you, together. https://t.co/bnArtfNm9O

Just last week, Lewis was in the hospital to undergo an emergency surgery for a severe internal hernia after experiencing severe abdominal pain. If not immediately treated, it could have been life-threatening.

It turned out to be a pretty good night overall for Minnesota Democrats.

And Democratic nominee Joe Biden won the state in the general election, nabbing its 10 electoral votes.

Australia Radically Changes COVID Policy As Omicron Sweeps Through Nation
Townhall
'An ABUSIVE FARCE'! Yossi Gestetner DROPS Biden in DAMNING, receipt-filled thread for claiming he will finish the job and shut COVID down
Twitchy
NBC Poll Reveals the Most Unpopular Major Political Figure—and Where Things Are Headed
Redstate
Where the Hell Are the Men?
PJ Media