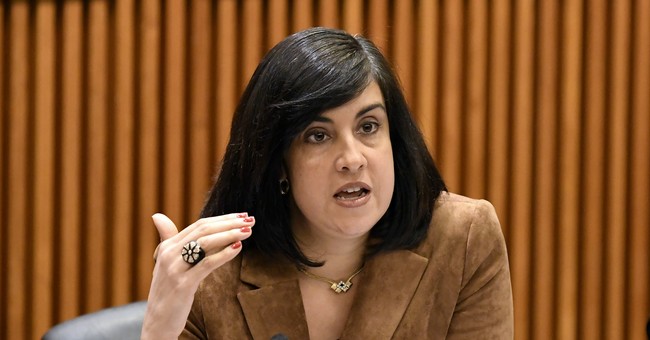 According to the Staten Island Republican Party, conservative, Trump-endorsed Nicole Malliotakis has pulled off a surprise win and defeated incumbent Rep. Max Rose (D-NY) in New York's 11 congressional district. She currently serves as a Staten Island Assemblywoman. She declared victory at the party's headquarters in New Dorp.

MALLIOTAKIS DECLARES VICTORY: Leading in the results, Assemblywoman Nicole Malliotakis declared victory at the Staten Island Republican Party headquarters in New Dorp a short while ago.

The Sergeants Benevolent Association, which is comprised of approximately 13,000 active and retired sergeants of the NYPD, congratulated the winner.

Winner, Nicole Malliotakis has won the Congressional Seat Representing Staten Island and Brooklyn. Great job Nicole, well deserved and thank you to all those who supported you. ???????????????? @NMalliotakis pic.twitter.com/0cwVlvc0Ph

Malliotakis has been eager to fix the Democrats' radical agenda in New York, including reversing their disastrous and dangerous bail reform.

Rep. Rose has flip flopped on several issues since he's served in Congress. The most egregious instance being when he claimed to be opposed to impeaching President Trump. A few weeks later he suddenly was in favor of it and fell in line with Democratic leadership.

“So while the president of the United States may be willing to violate the Constitution to get reelected, I will not,” he said in Staten Island. "I intend to fully support this impeachment inquiry and follow the facts."

The NRCC called him a "fraud" for that charade.

"He is completely out of sync with this district," Malliotakis told NY1 at the time. "This is a district that wants our elected officials, that wants Congress, to actually go and do their job and work with the president to get things done."

UPDATE: Rep. Rose is not conceding.

"We came in tonight saying we may not know a winner at the end of this evening and that is still the case. At this moment there are more than 40,000 absentee ballots that were returned, with potentially 10,000 more in the mail"