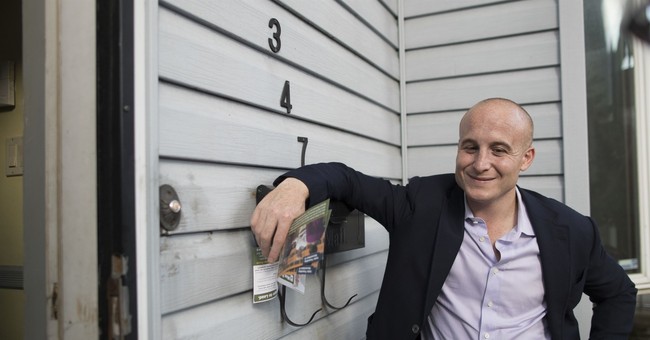 Rep. Max Rose (D-NY) explained to New Yorkers in an op-ed last month that he does not support his colleagues' impeachment proceedings against President Trump because there's too much work to do on behalf of his constituents.

"But there’s far too much work left to be done and we are in danger of losing the trust of the American people if we choose partisan warfare over improving the lives of hardworking families," Rose reasoned. "I made a promise to my constituents to focus on making their lives better, and I won’t break it."

All the work must be done, because Rose is ready for impeachment. And it only took a secondhand whistleblower complaint to get him there. News of Trump's controversial call with Ukrainian President Zelensky and his hope to investigate the Bidens convinced Rose that this president needs to be investigated himself.

I've now taken an oath to defend the Constitution twice, once on my way to Afghanistan, and the second as a Member of Congress.

I will not break that oath. pic.twitter.com/QOvSvFwCH4

“So while the president of the United States may be willing to violate the Constitution to get reelected, I will not,” he said. "I intend to fully support this impeachment inquiry and follow the facts."

Rose tried to explain that the Trump White House is to blame for his impeachment 360, because officials continue to resist subpoenas related to Ukraine and refuse to cooperate in the investigation.

The NRCC doesn't buy it and called Rose a "fraud."

Remember a few weeks back when you wrote an op ed about how you opposed impeachment because it "will only tear our country further apart and we will see no progress on the enormous challenges we face as a nation?" What a fraud. #NY11 https://t.co/TS338Lyp3H

"He is completely out of sync with this district," she told NY1. "This is a district that wants our elected officials, that wants Congress, to actually go and do their job and work with the president to get things done."

Other Republicans have termed Rose's change of heart political suicide. His New York district, described by NY1 as "one of the most vulnerable in the country," voted for Trump by 10 points in 2016.

The RNC knows it too. They chose Rose as their first target in a new impeachment-centered ad campaign.