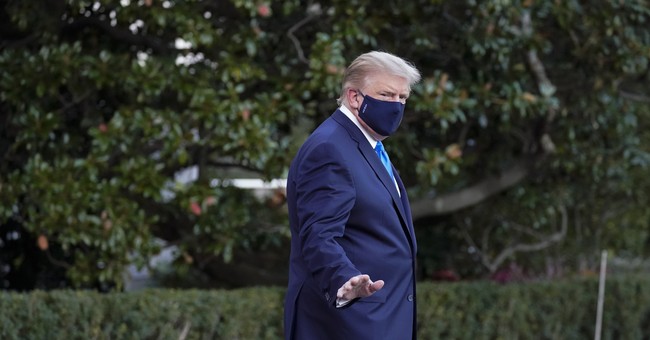 A disturbing new Morning Consult poll found that 40 percent of Democrats say they are "happy" with President Trump's positive COVID test. Twenty-two percent said that sentiment described how they were feeling "very well," while 18 percent said "happy" described how they were feeling "somewhat well." Trump and First Lady Melania announced they had tested positive for COVID-19 late Thursday night. The president was moved to Walter Reed Hospital for precautionary measures on Friday. His physician, Dr. Sean Conle,  reported last night that the president was doing "very well" and is not in need of supplemental oxygen. He is, however, starting Remdesivir treatments.

Morning Consult found that while Republicans are "sad and worried" for Trump, Democrats are "indifferent and happy."

According to a new @MorningConsult poll, 40% of Democrats are "happy" and 31% are "excited" about @realDonaldTrump's COVID-19 diagnosis. pic.twitter.com/GLMTuC3HaR

CNN political analyst Kirsten Powers insists we're looking at this all wrong. She believes there's a positive take on the survey. What it shows, she said, is that Democrats are happy not that he's sick, but because it may open his eyes to how dangerous the virus really is and change his COVID policies accordingly.

Is it possible they are happy not bc they want him to suffer but bc it might make him take it more seriously, thus saving other people’s lives in the long run? Does it ever occur to you that Democrats can be decent people? https://t.co/asCvdezGM4

That is so much spin I’m dizzy.

Dems are happy Trump has COVID because they wish him ill (while preaching about decency to the rest of us). I think you know that.

Yeah, that's it. If you just ignore the countless verified & unverified twitter Dems explicitly wishing him death, that totes makes sense.
The left will continue to radicalize because the allegedly "moderate" left cannot condemn them. Antifa? Just an idea. Riots? Mostly peaceful. https://t.co/U0cTB8NRew

Powers's assessment might be more credible if we didn't already have bundles of proof that leftists are gleeful that the president is in the hospital. They believe he deserves it.