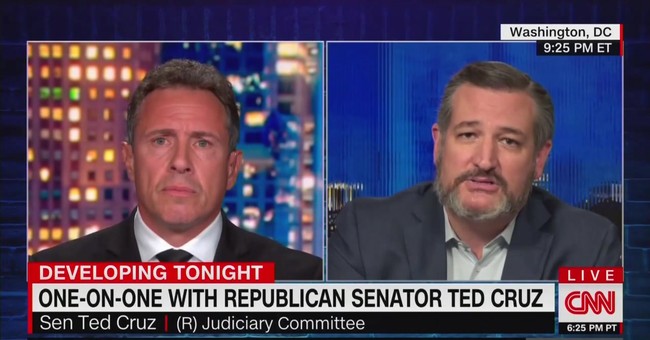 CNN anchor Chris Cuomo finally found himself a guest that was willing to press him about his brother's dangerous policies. Sen. Ted Cruz (R-TX) held nothing back in their interview Wednesday night, including how Gov. Andrew Cuomo's nursing home mandate that forced facilities to accept recovering COVID patients left tens of thousands of seniors vulnerable. The state suggests that over 6,000 seniors died from COVID in elder care homes. But because New York doesn't take into account residents who died after being transferred to the hospital, we expect the number to be much higher.

Governor Cuomo claims that his government never made a nursing home take a Covid-positive person: "It just never happened in New York." pic.twitter.com/nMmGS3GnQY

Like Gov. Cuomo, Chris responded to the criticism about the nursing home order by deflecting to President Trump and suggesting it's his failure that has so far resulted in over 200,000 U.S. deaths. But Sen. Cruz kept pushing.

"It's particularly not right, Chris, when your brother has presided over the state with the highest death rate in the country," Cruz countered.

The senator said it's time that they have a serious discussion about the governor's nursing home policy.

"Was it a mistake when your brother implemented a policy that nursing homes had to accept COVID positive patients and endangered the lives of tens of thousands of people?" the senator asked Cuomo without a beat. That policy, he said, was a "serious mistake."

"My brother was the first to say that there was a learning curve, mistakes were made, and they changed things as soon as they could," the anchor responded.

Cuomo took offense and said that instead of "sitting there and stroking his beard like a wise man," perhaps the senator should tell the president to "get on it."

Cruz replied, "How about telling your brother to get on it!"

Fox News senior meteorologist Janice Dean, who has been one of the heroes in the fight to get real answers from the governor, commended Sen. Cruz for his fiery interrogation.

Thank you @tedcruz for literally being the only person that has EVER brought this up to @ChrisCuomo after all the unethical interviews he did with his brother @NYGovCuomo pic.twitter.com/m1toWMKwNT

Dean's in-laws were two of the thousands of New Yorkers who succumbed to the coronavirus in nursing homes. She has led calls for an independent investigation of the governor's nursing home policy.