President Trump Thanks Oscar Winner for the Endorsement 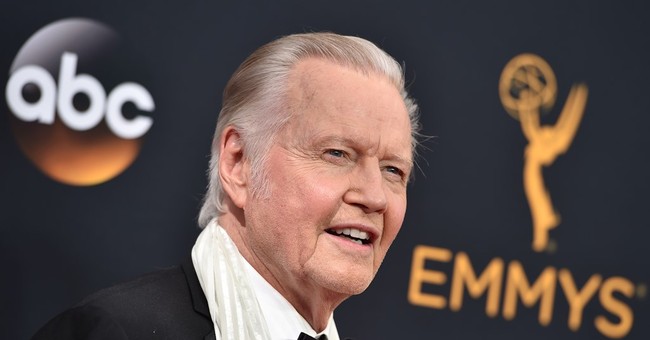 Academy Award winner Jon Voight is one of those rare conservatives in Hollywood who actually talks about his conservatism. In a recent video message on Twitter, Voight, who most recently starred as Mickey Donovan in Showtime's "Ray Donovan," warned what could happen if we continue to let "left wing danger" run amok in the U.S. God will "not allow" it, he said.

"God the Almighty gave all this to us, so we as a civilization with all our greatness must give back and we shall protect the USA with God, and He who understands this Liberty must protect as well," he explained.

"Let us all protect this beautiful nation," the actor continued. "Let us all give back."

The solution, Voight said, perhaps to some viewers' surprise, is to re-elect President Trump.

"So bring back faith and trust," he says. "And don't forget that this November, we must vote to keep President Trump in office so he can carry the torch for this land of the free. And my dear friends, Donald Trump will keep her flame alive and he will protect the United States of America. God bless."

Some media mocked Voight for what they called his "bizarre religious video," while some of his fellow actors expressed their disappointment.

I spent a good amount of time with Jon Voight. He was a kind man and especially nice to me.

I wish him well.

But I cannot sanction his support of Trump who is a barely sentient bag of moldy racist oranges.

Hollywood supporters of Trump are so few and far between that it always makes headlines. Kanye West proudly sported that iconic red Make America Great Again hat and even met with the president in the Oval Office. That is, before he rescinded his support and announced he'd be staging his own presidential campaign.

The newly released list of speakers for this summer's Republican National Convention also has a few familiar faces. But, as always, the DNC, with its Katy Perrys and Meryl Streeps, will probably resemble an all-in-one Oscars and Grammys.