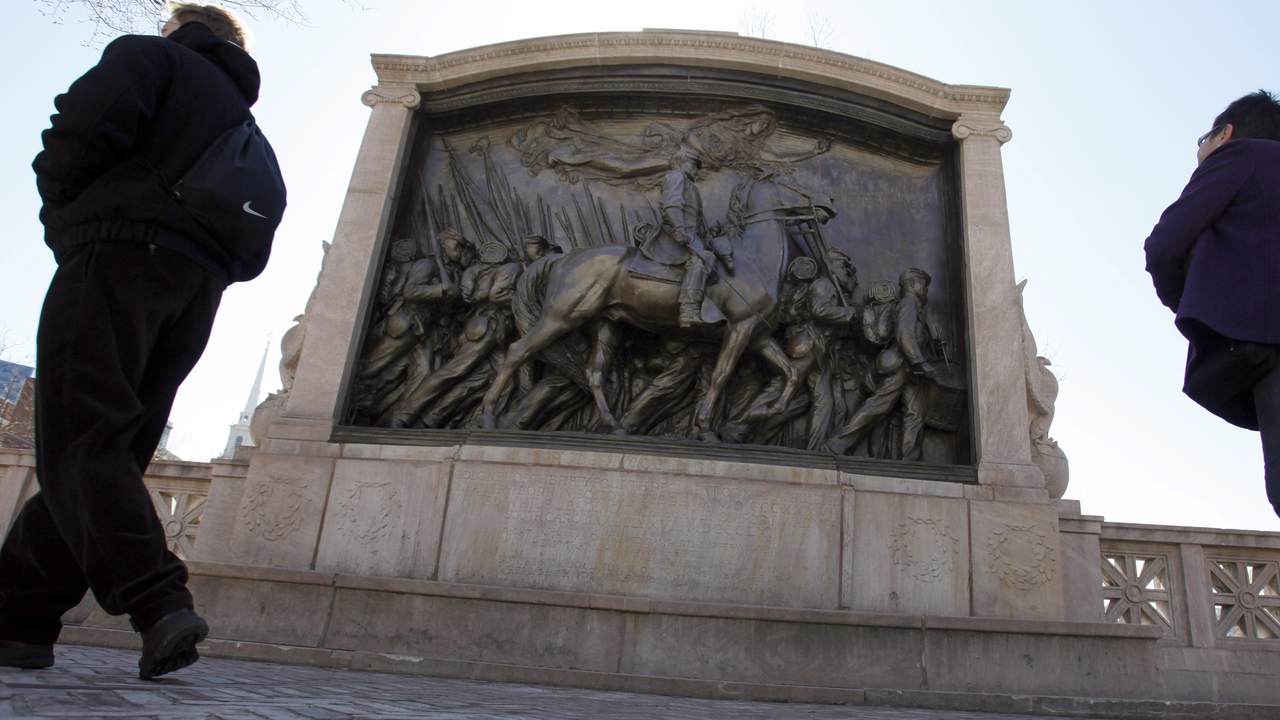 In his infuriated speech on the Senate floor last week against the rioters who have once again defaced America's historical monuments with spray paint, Sen. Tom Cotton (R-AR) mentioned one especially tragic target in Boston: The Robert Gould Shaw and the 54th Regiment Memorial. The monument is now stained in red, proving yet again that some of these vandals have no idea who, what or why they're vandalizing.

The Robert Gould Shaw and the 54th Regiment Memorial serves as an homage to some of the first black Americans to fight in the Civil War. On its website, the National Park Service explains how a brave group of men signed up for Massachusetts 54th Volunteer Infantry in 1863. It was the first black regiment formed after the Emancipation Proclamation.

The Robert Gould Shaw and Massachusetts 54th Regiment Memorial, located across Beacon Street from the State House, serves as a reminder of the heavy cost paid by individuals and families during the Civil War. In particular, it serves as a memorial to the group of men who were among the first African Americans to fight in that war. Although African Americans served in both the Revolutionary War and the War of 1812, northern racist sentiments kept African Americans from taking up arms for the United States in the early years of the Civil War. However, a clause in Abraham Lincoln’s 1863 Emancipation Proclamation made possible the organization of African American volunteer regiments. The first documented African American regiment formed in the north was the Massachusetts 54th Volunteer Infantry, instituted under Governor John Andrew in 1863. African American men came to enlist from every region of the north, and from as far away as the Caribbean. Robert Gould Shaw was the man Andrew chose to lead this regiment.

National Park Service officials tried to put the soldiers' heroics into words again at a ceremony outside the Shaw Memorial in October 2019 as they announced a major restoration project for the monument. A restoration that was supposed to start in the spring of 2020.

"These soldiers wore the uniform of a country that did not recognize them as citizens, nor even acknowledged their humanity," explained Rose Fennell, deputy regional director for the Northeast Region of the National Park Service. "Yet they dedicated themselves to the nation's survival knowing that victory in war would lead to the emancipation of millions."

Liz Vizza, the Deputy Superintendent for the National Park Service who presided over the restoration announcement, shared that the memorial, which has stood since 1897, "has borne witness to our city's civic and political landscape."

"It serves as a reminder of speaking truth to power, of understanding our roots, and of the impact we citizens can have on a nation," she added.

Vizza hoped that the physical restoration of the monument would engender a symbolic one as well, for it was to coincide with the yearlong commemoration of the 400th anniversary of slavery in North America.

"We hope this project will provoke us all to think about where we stand on the issues of race, freedom, and justice, and to repair the cracks that exist in our public dialogue," Vizza intoned. "As we rebuild this foundation, we give new voice to the promise of Americans values that this memorial embodies."

The restoration project was supposed to fix the cracks in the foundation that have appeared as a result of water damage. But now the team will now be forced to address several other issues after rioting Bostonians greeted the monument with red paint.

One of the memorials targeted by vandals was the Robert Gould Shaw and the 54th Regiment Memorial, which was unveiled 137 years ago Sunday and depicts a pioneering group of Black soldiers marching into battle during the Civil War.” Boston Common. pic.twitter.com/VpVUFvfHJF

The vandalism of the Shaw Memorial is not the first missed target of protesters. A group of misguided activists in Philadelphia also vandalized the statue of Matthias Baldwin, an abolitionist who, for years, fought for the education of young black Americans.

The heroics of the 54th Massachusetts Volunteer Infantry were told in the movie "Glory," starring Denzel Washington. I know I'll be watching.