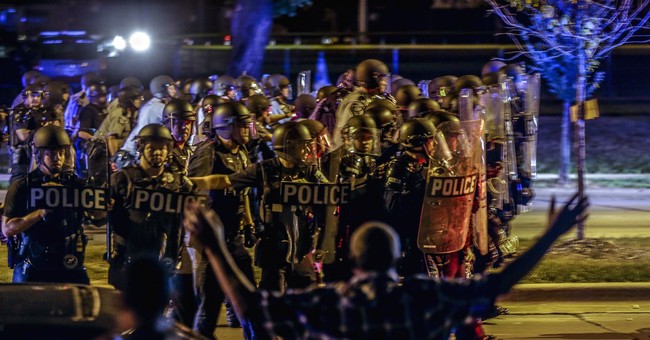 Erie County, New York District Attorney John Flynn told the press on Sunday that police made 10 arrests the previous evening during riots in the city of Buffalo. It was the sixth straight night of protests around the country in the aftermath of the police killing of an unarmed African American man, George Floyd, in Minneapolis. One of the Buffalo rioters, 21-year-old Daniel D. Hill, was arrested for breaking into a liquor store, throwing bottles at police officers, and other violent acts. However, thanks to the state's recent bail reform, Hill was released Sunday morning and is expected to return to court on July 15.

Flynn's hands are full of investigations. His office is currently assessing this weekend's damage, including acts of arson, an attack on a young woman who is currently at ECMC with a serious injury, and an attack on a WIVB cameraman. There's also the incident involving a man who threw a flaming object through the window of city hall in Buffalo, an act which earned him the title "idiot" from the city's mayor, Byron Brown.

But, Flynn noted it could have been a lot worse.

"Buffalo police did a great job last night," Flynn said, adding that officers from neighboring cities came to help too. "All law enforcement last night did a fantastic job."

The riots we've seen in major cities across the country have been flooded with signs sounding off on "police brutality," or likening cops to the KKK. Derek Chauvin, the arresting officer who was filmed pressing his knee into Floyd's neck until he went motionless, and kept his knee there after Floyd was unresponsive, was white. Yet, Flynn perhaps surprised people in his remarks when he noted that the majority of the arrests Saturday night were of white individuals. The African Americans who came out to protest, the DA said, were largely peaceful.

"Just so you know, the overwhelming majority of the 10 individuals who were arrested last night, were white," Flynn said at the Sunday presser. "They were not African Americans. The African Americans who were down here last night were peacefully protesting, doing the right thing, as I have seen all across the country."

He charged that it is "white individuals who are the agitators and that is true here in the city of Buffalo."

Police are also on high alert for someone who posted a message on Facebook encouraging people to loot the Walden Galleria Mall on Sunday night. Again, this was a white individual. According to Flynn, the young man wrote in his social media message, "By the way, I'm white, and I'm with you my black brothers and sisters."

Of course, rioters both black and white have been wreaking havoc all over the country. From Washington, D.C. to Santa Monica, CA, looters have been lighting cars on fire and kicking in barricaded storefronts to steal everything in sight.

Flynn realized that he is in a position in which he could enact some change to try and help his community, and the nation, heal.

"I am justice," Flynn said. "DAs across the country, we are justice. We need to do justice."

"We will help solve this problem," he added. "I will dedicate the next four and a half years in office to help solve the problem. At the end of the day I promise you we will do better."

He pledged that "people are going to get arrested" and prosecuted. "I can assure you of that."

Buffalo officials were forced to issue an emergency order Sunday night, and enforce a curfew. It appears to have worked because Mayor Byron Brown said the evening was largely peaceful.

I am issuing an updated Emergency Order , tonight there will be county-wide curfew at 9pm and ending at 6am June 1st. I am doing this based on information from law enforcement and we want to be extra cautious and ensure our community is safe. pic.twitter.com/OFdHgNHMNq