Jailed Hair Salon Owner: No, I'm Not Some 'Republican Actress' 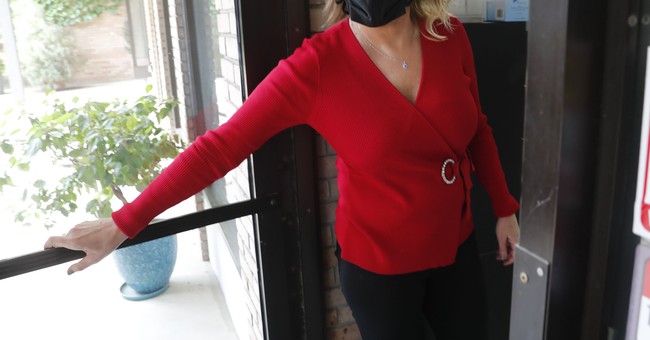 Dallas hair salon owner Shelley Luther was jailed for opening her business earlier this month in order to support her family. A judge sent her to prison for seven days for violating the state's stay-at-home order, which ordered all non-essential businesses to close. Americans, not just Texans, rallied behind her. Once he learned of her ordeal, Texas Gov. Greg Abbott altered his executive order to mandate that no business owners could be jailed for violating the order. He issued it retroactively and Luther was freed.

The sticky situation gave her some unexpected business momentum. Not only is Luther's Salon a la Mode beginning to see some famous customers, but she said they're back open and "way busier than they were before."

In a conversation with ACU Chairman Matt Schlapp, Luther encouraged her fellow business owners to open their doors as well.

"I think the best momentum would be if everybody just decided to open up," she suggested. "What are they going to do? They can't do anything if we all open. Right now. Everybody. Are they really going to go and arrest every single business owner and cite every business owner?"

Even if they did, Luther noted it would be an "unlawful cite" because they aren't even breaking a law.

Luther could only chuckle at critics who have painted her a political pariah.

"They're still thinking I'm some actress hired by the Republicans and I'm going to like lead some Tea Party action or something. I wasn't really super pol before this. I watched the news and was informed but I wasn't really an active person so for them to say that was pretty comical to me."

Luther used the money she raised in jail to start a charitable foundation called Courage to Stand to help small business owners being targeted across the country. In fact, she was on her way to Michigan to help Karl Manke, a barber owner in Ossowo who opened his shop despite the stay-at-home order issues by Gov. Gretchen Whitmer. Luther shared on Facebook that she'd be joining the 77-year-old Manke on Monday afternoon.

"Be an American. Open your business. It is an unlawful ordinance," Luther said of the stay-at-home orders. "It is not a law. If we all stick together. All of us, as Americans it doesn't matter - red blue or whatever - if we all stick together, then we will overcome this. But if we bow down in fear, then they are going to conquer this. And we cannot let that happen."