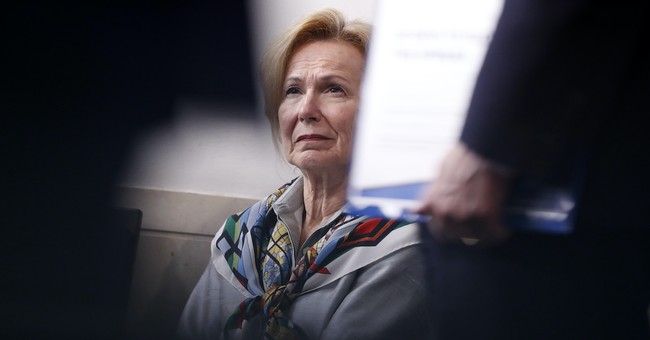 "The View's" Sunny Hostin called Dr. Deborah Birx "part of the problem" on Monday for refusing to stand up and silence President Trump when he misspeaks during the coronavirus task force briefings. For instance, when he suggests patients use "disinfectants" to combat the illness. Hostin called Dr. Birx "complicit" and asked her guest Sen. Amy Klobuchar (D-MN) on Tuesday if she agreed.

"Republicans are supposed to be the party of families, but we’ve had 56,000 deaths in American families from this virus and record unemployment," Hostin noted. "Why do they still stand behind this president, and are they complicit for covering up these actions and having a playbook, a literal playbook, that blames everyone but Trump?"

Klobuchar wasn't quite so critical of the medical professionals, who she rightly noted have stellar resumes and reputations, as well as a history of working around the clock to protect Americans. Dr. Birx was on the frontlines of the fight against HIV/AIDS in the 1980s.

"You know, these are doctors and they’re there to do their job and she has vast medical experience," Klobuchar said of Dr. Birx. "She’s someone that has worked under Republican and democratic presidents and has a lot of credibility, she and Dr. Fauci. You know, do I agree with everything they say every day when they’re responding to Trump, no. But do I think it’s important that they’re there and we have some medical sanity and we have people that are actually trying to get the facts out, that is so important. To me that goes beyond politics."

Klobuchar added that the only person to blame is the president.

"There’s really one person that’s responsible for this disinformation, for blaming other people, for not responding early enough to get the testing going that we’re starting to see now happen state by state slowly but surely, and that is the man who’s in charge," she said. "That’s Donald Trump."

As much as the media and leading Democrats continue to attack Trump for his response to the coronavirus, medical experts agree that his early decision to ban travel to and from China saved lives, and his administration's swift efforts in boosting our ventilator supply got immediate help to the states who most needed it. The White House is now leading the same public-private partnership on coronavirus testing.