Why 'The View' Thinks Dr. Birx Is 'Part of the Problem' 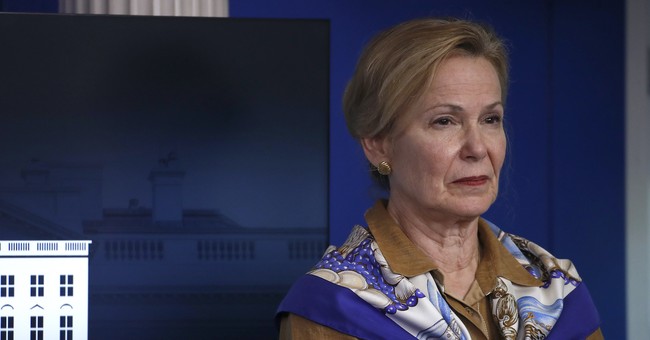 The ladies of "The View" are still taking shots at the White House and the coronavirus task force even when they're not sitting at the infamous Hot Topics table.

On Monday, Whoopi Goldberg and Sunny Hostin were chatting about President Trump's now-infamous "disinfectant" comments, where he suggested that disinfectants may be a potential cure for COVID-19. He's since walked it back as a joke. Hostin said that some of the blame had to be directed to the experts around him who failed to stand up and correct him. Goldberg asked Hostin if she believed that Dr. Deborah Birx, for instance, was "part of the problem."

"I do," Hostin said. "I do think she’s part of the problem, and it gives me no pleasure to say that."

Hostin was incensed that Birx had suggested in a recent CNN interview that the media was to blame for controversial "disinfectant" comments because they kept talking about.

"And I believe at this point Dr. Birx is complicit in what’s going on because when there are times like this, good people with integrity need to stand up and need to speak truth to power," Hostin said in frustration. "You can’t be complicit in a time like this, Dr. Birx, and so I think she has become part of the problem. I mean, we had her on our show, I believe April 15th? She said a lot and said nothing. It was like one big word salad.”

Hostin noted that Birx does have a "storied" career, but that she is now "losing her integrity."

Hostin tragically undersold Birx's resume. After her tenure at the Department of Defense as a military-trained clinician in immunology, Birx later became the Director of CDC’s Division of Global HIV/AIDS. In that role, she accomplished just about everything she could:

From 2005-2014, Ambassador Birx served successfully as the Director of CDC’s Division of Global HIV/AIDS (DGHA), which is part of the agency’s Center for Global Health. As DGHA Director, she utilized her leadership ability, superior technical skills, and infectious passion to achieve tremendous public health impact. She successfully led the implementation of CDC’s PEPFAR programs around the world and managed an annual budget of more than $1.5 billion. Ambassador Birx was responsible for all of the agency’s global HIV/AIDS activities, including providing oversight to more than 400 staff at headquarters, over 1,500 staff in the field, and more than 45 country and regional offices in Africa, Asia, Caribbean, and Latin America. Recognized for her distinguished and dedicated commitment to building local capacity and strengthening quality laboratory health services and systems in Africa, in 2011, Ambassador Birx received a Lifetime Achievement Award from the African Society for Laboratory Medicine. In 2014, CDC honored her leadership in advancing the agency’s HIV/AIDS response with the highly prestigious William C. Watson, Jr. Medal of Excellence.

In 2014, President Obama appointed her ambassador-at-large and global AIDS coordinator.

Dr. Birx's foresight even saved her own life. When in labor with her first daughter, Birx had lost a significant amount of blood and her doctor had ordered a blood transfusion. Birx screamed at her husband not to let the doctor do it because she had researched the risks about it. The transfusion was stopped and they later learned it was indeed contaminated with HIV.