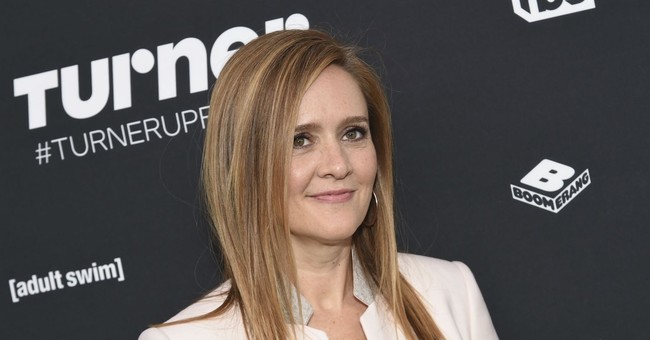 "Comedian" Samantha Bee, host of "Full Frontal With Samantha Bee," tried to suggest this week that the anchors and personalities at Fox News were telling their viewers that containing COVID-19 is somehow "un-American." She used Laura Ingraham and Harris Faulkner as examples. Or, as she called them, "the bobblehead dolls at Fox News."

In the clip Bee provided, Harris Faulkner tells her guest Gov. Mike Huckabee, "This country was kind of founded on people who were wiling to risk themselves for freedom." And that's where the clip ends, suggesting that Faulkner was encouraging folks to go put themselves in danger and protest stay-at-home orders.

"It makes sense that everyone at Fox News is okay with people dying so we can get back to work. They're already used to working for a mummified corpse," Bee said. Her idea of cruel joke.

She added that the Fox hosts were "idiots" who "dismiss people's lives."

Either Bee or her production team knew the 5-second soundbite of Faulkner's interview didn't reflect her sentiments. Because, had they watched the whole interview, they'd know that at the outset of her discussion with Gov. Huckabee, Faulkner noted that people have the right to protest, but she insisted we need to get demonstrators to "live by the guidelines we all agree upon," such as social distancing.

When Huckabee began to say that these protests "are not against the social distancing guidelines," Faulkner immediately interjected.

"Governor, please forgive me...I'm not seeing what you're saying speaking out," she said while watching protesters in Harrisburg, PA. Several people were "close together and clustered."

Huckabee admitted there are "clearly people violating it," as people will always violate laws. But he used Michigan as an example to show that some governors are enacting laws that are much too draconian. Gov. Gretchen Whitmer (D) won't even let people buy gardening tools.

That omitted exchange aside, Bee also did not make note of anchors on other news outlets like CNN who have downplayed the coronavirus. Last month Anderson Cooper said it wasn't as deadly as the flu. Or how about New York City Mayor Bill de Blasio, who told New Yorkers to not be afraid to go out to the movies last month. Or House Speaker Nancy Pelosi, who told Californians to come on out and enjoy Chinatown in late February. Nope. But Bee did find a few examples of Republican lawmakers urging residents to reenter society.

I leave you with Bee's profound wisdom about the dangers of reopening the economy: "We're not facing a choice between saving lives or saving the economy. The simple fact is, the economy is people. And dead people don't buy stuff."