Nikki Haley Had a Message for the Boycotting Dems 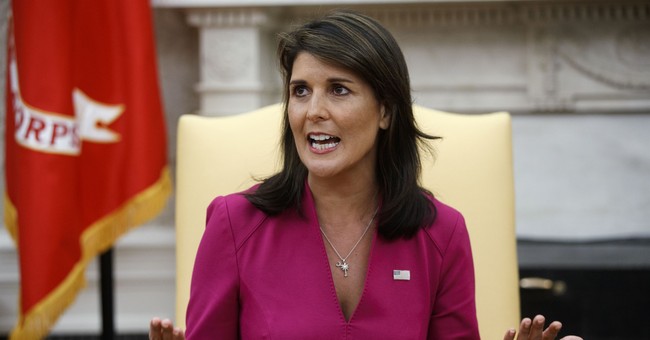 The Democrats put on a show Tuesday night during President Trump's State of the Union. They gave him the silent treatment as he touted bipartisan successes, while the Speaker of the House dramatically tore a copy of his speech to shreds.

But at least they showed up! A handful of Democrats, among them progressive firebrand Rep. Alexandria Ocasio-Cortez (D-NY) boycotted the speech entirely because they didn't want to "legitimize it." Whatever that means. She held an Instagram Live instead. Other boycotting Democratic lawmakers included Rep. Maxine Waters (CA), Rep. Steve Cohen (TN), Rep. Al Green (TX), and Rep. Frederica Wilson (FL). Rep. Green couldn't show his face because, he explained on Twitter, he didn't want to listen to the "impeached, reckless, ruthless, lawless, shameless, corrupt, & unapologetically bigoted president."

Former U.S. ambassador to the United Nations Nikki Haley had to chime in on this one.

.@AOC & the Dems who chose to boycott the SOTU. When you represent people, your job is not to just do the things you like. It is to rep ALL people. Listening to the issues by the Pres is your job. Maybe someone else should step in who is willing to do the job that you aren’t. ????

She also singled out Pelosi's antics.

Disappointed to see @SpeakerPelosi rip up the speech that mentioned lives we’ve lost and heroes we celebrated at the SOTU. No matter how you feel or what you disagree with, remember others are watching. This was unbecoming of someone at her level in office.

“It was a courteous thing to do,” she said.

It wasn't courteous and, as it turns out, it wasn't smart either. The speaker's immature stunt appears to have put more Americans than ever on the side of the president. Happy Acquittal Day!