GOP Reps Explain How Pelosi Has Ruined Her Legacy 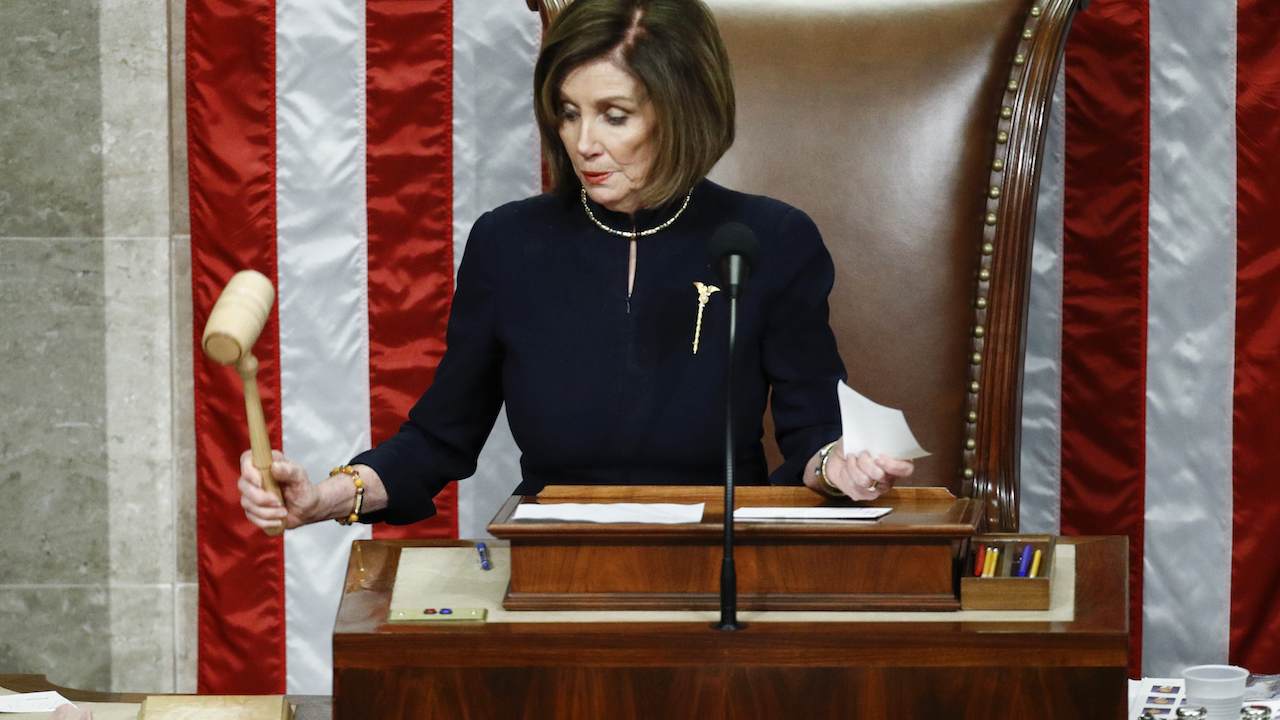 Democrats voted to impeach President Trump on abuse of power and obstruction of Congress last month, but they are not even close to being on their way to the Senate. And that is largely House Speaker Nancy Pelosi's doing. She is not letting go of those articles, she says, until Senate Majority Leader Mitch McConnell agrees to Minority Leader Chuck Schumer's demands. He wants to hear from four more witnesses, including Acting White House chief of staff Mick Mulvaney, former national security adviser John Bolton, who on Monday said he'd testify if subpoenaed, senior adviser to the acting White House chief of staff Robert Blair, and Office of Management and Budget official Michael Duffey. And Schumer wants to see a whole new set of documents from the White House. According to Speaker Pelosi, the Democrats are acting in the interest of democracy.

The President & Sen. McConnell have run out of excuses. They must allow key witnesses to testify, and produce the documents Trump has blocked, so Americans can see the facts for themselves.

The Senate cannot be complicit in the President's cover-up. #DefendOurDemocracy https://t.co/TQLJsfn0f5

This type of political extortion is a far cry from what we heard from the speaker last year. For months, Pelosi dismissed her more progressive colleagues' calls for impeachment. She told them that they'd only move forward if they had a legitimate case and she instructed Democrats to focus on other, more pressing items instead. Prescription drug costs, for instance. But, Trump's phone call with Ukrainian President Zelensky apparently - quickly - changed her mind. And now impeachment is all that matters. It's as significant as defeating Nazi Germany.

Give me a break, said Sen. Lindsey Graham (R-SC). He suggested on Sunday that Pelosi and Schumer's hesitation to the Senate trial has less to do with their constitutional morals, and more to do with their cowardice. President Trump shared some of Lindsey 2.0's remarks.

“The reason they are not sending the Articles of Impeachment to the Senate is that they are so weak and so pathetic.” @LindseyGrahamSC @MariaBartiromo The great Scam continues. To be spending time on this political Hoax at this moment in our history, when I am so busy, is sad!

The word "unprecedented" has been thrown around a lot these days, but it seems to stick where Pelosi's strategy is concerned. Her pandering has gotten so bad, Rep. Doug Collins (R-GA) said, that he thinks she's derailed her own legacy.

"I think she had a bad Christmas Carol ghost of Christmas past in which she trashed all the rules of the House to rush through the articles before the end of the year," Collins charged.

"They have no basis in reality to impeach the president," he said. "And she’s looking at a future in which she has no legislative agenda. There is nothing in the House for her to do because they have wasted so much time and taxpayer dollars on impeaching the president."

"That’s how sad this speaker’s legacy is so far," he added.

Rumor has it that Pelosi is holding on to the articles against Trump so they will still be hanging over his head during the November general election. Again, Republicans share their disgust at her political games.

A dangerous precedent is being set in this country because of the baseless actions of @SpeakerPelosi and House Dems. America's elections are the basis of our democracy, yet 63 million voices are being silenced because of a political agenda. Send the articles, Madam Speaker!

"If Speaker Pelosi is afraid to try her case, the articles should be dismissed for failure to prosecute and Congress should get back to doing the people’s business,” he said.