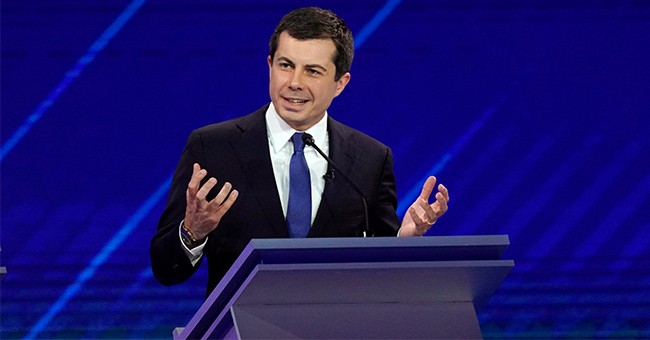 Pete Buttigieg, the mayor of South Bend, Indiana who is currently running for president, is struggling to make headway with African-Americans because of a series of missteps, bad judgment and gaffes. He's polling at zero percent support with the demographic in South Carolina. Zero.

There's now a resurfaced clip of Buttigieg when he was running for mayor that won't help his case. In the video, Buttigieg is discussing the importance of education with a group of lawmakers. The controversial part is where he suggests that minority children don't have many examples of a successful education.

To gauge how the black community feels about the Indianan in light of the new video, you can look no further than a new piece from The Root entitled, simply, "Pete Buttigieg is a Lying MF." In his writeup, Michael Harriot paints Buttigieg as a privileged hypocrite.

"But even though Buttigieg has never attended a school with more than 10 percent black students, he thinks he knows what’s stopping black kids from achieving their educational dreams," Harriot writes.

The Buttigieg campaign did its best to deflect.

"Pete's point is that we have to recognize that structural barriers persist in our public education system, and that these barriers disproportionately impact low-income and minority communities," his spokesperson said in a statement to Newsweek.

Buttigieg then decided to respond directly, revealing on CNN Tuesday night that he called Harriot after having read The Root piece. He started the conversation by telling Harriot he "didn't think he'd ever been called a ‘lying motherf**ker’ before" and that he believed the characterization was unfair. Then, the two started to talk about education.

Again, Harriot shared his thoughts online, making it clear that Buttigieg can't talk about education without acknowledging the system - and the nation at large - is inherently racist.

I told Buttigieg I actually watched the entire 58-minute interview before writing the article and pointed out that it was infuriating to watch four white men talk about what was broken in the black community without acknowledging who broke it and who refuses to fix it. I specifically noted the gentleman who spoke about a program that teaches 40 basic “building blocks” (honesty, integrity, parental support, role models, etc.) to make healthy adults and keep kids off the street.

It sounded as though Harriot appreciated the candidate reaching out to him, especially after he called him an expletive. But he doubted whether Buttigieg understood the real struggles in the black community and whether he could do anything about it.

The Buttigieg campaign has had a few other PR issues when it comes to its take on diversity. They've talked at length about the candidate's Douglass Plan, which is dedicated to increasing diversity in classrooms. But, when they recently unveiled a list of 400 endorsements from black South Carolinians who had supposedly endorsed the plan, it was not exactly how it was advertised.

Better news awaits Buttigieg in Iowa, where he's emerged as the surprising frontrunner.

Share this on Facebook
Tweet
Gov. Abbott: Mayors of NYC, DC Should Call on Biden to Act on the Border Crisis
Madeline Leesman
After FBI Raids Mar-A-Lago, It's Republicans Who the Mainstream Media Thinks Is Worth Condemning