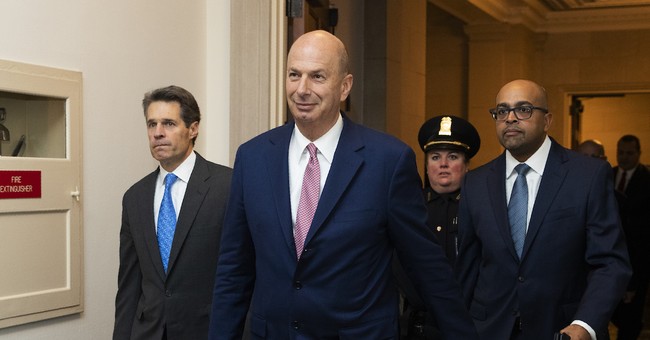 U.S. Ambassador to the EU Gordon Sondland is the star witness on the fourth day of public impeachment inquiry hearings. The Democrats launched the inquiry against President Trump based on a secondhand whistleblower complaint alleging that Trump tried to pressure Ukraine to investigate his political rival Joe Biden and his son Hunter Biden and their ties to a corrupt Ukrainian gas company. According to the whistleblower, Trump suggested to Ukrainian President Zelensky that if he didn't investigate the Bidens, he'd withhold U.S. military aid.

Trump and his associates explain that the president asked Zelensky to investigate the Bidens to root out corruption. It had nothing to do with politics or military aid. As others have noted, the aid was ultimately released.

The most important quote out of this hearing so far:

Sondland: "I've never heard from President Trump that the aid was conditioned on the investigations." He reached this conclusion on his own.

So, in short, yet another witness who can't testify to the Democrats' accusations.

This exchange between Sondland and Republican counsel Steve Castor put an exclamation point on it.

?? The president never told you about any preconditions for aid?

?? The president never told you about any preconditions for a White House meeting?

Sondland said the same thing in closed-door testimony, revealing that in a phone call he had with Trump in September, the president assured him there was "no quid pro quo."

Before sending that text, Ambassador Sondland had a phone call with the President.

Sondland asked President Trump “what do you want from Ukraine?”

The President said, “I want nothing. I want no quid pro quo. I want Zelensky to do the right thing... to do what he ran on.” https://t.co/OHPUcli9Zz pic.twitter.com/HvkpxIgYwy

Other recent witnesses have said the same thing. Former NSC official Tim Morrison and former U.S. special envoy to Ukraine Kurt Volker testified that there was no quid pro quo, or, as Democrats now like to call it, bribery. Jennifer Williams, a foreign policy aide to Vice President Mike Pence, who was also on the July call, testified that she too hadn't been aware of any conditions placed on the foreign aid.

So what's with the quid pro quo narrative?