Matt Bevin Snaps at Reporter Over Impeachment: 'Is This a Civics Lesson?' 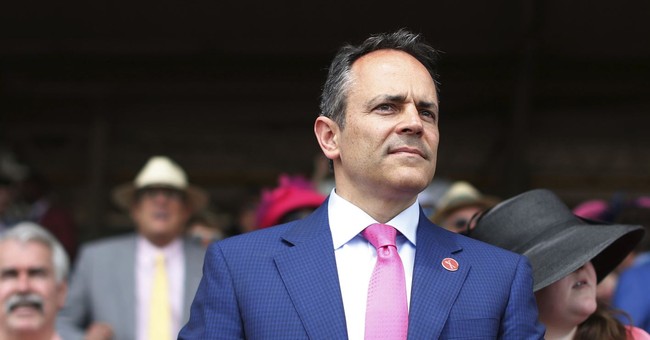 Gov. Matt Bevin is on the ballot Tuesday in Kentucky. It's going to be a tough re-election battle for the Republican, according to recent polling from Mason-Dixon, which puts him in an exact tie with Attorney General Andy Beshear at 46 percent each.

A group of reporters caught up with Bevin as voters went to the polls to ask him why he has been talking so much about the impeachment inquiry against President Trump. What, asked NBC News reporter Vaughn Hillyard, does it have to do with Kentucky?

NBC: "You don’t have a vote on impeachment--"
.@MattBevin: "Is this a civics lesson now? You think I don't understand what the role is? ...Ask the next 100 people who come in here if they care about this impeachment process...they find it to be a charade. It’s an absolute sham." pic.twitter.com/IaBlINSFbX

"Do you watch the news other than political ads?" Bevin asked Hillyard back.

"Here's the irony," Bevin explained. "The fact that you ask why this is being nationalized and why people are talking about President Trump would indicate to me that you've really sort of come out from under a rock. Here in American it's pretty topical every night."

Kentuckians are no exception, he added, before challenging the reporter to ask the next 100 voters whether or not they care about the Democrats' impeachment agenda.

"We don't appreciate when a handful of knuckleheads in Washington abdicate their responsibility as elected officials and try to gin up things that are not true because they can't handle the fact that Clinton didn't win," the governor said. "That's why this is talked about here."

President Trump campaigned for Bevin in Lexington Monday night. At one point he called him "a pain in the ass," but he meant it in the best way possible.

“Now he is difficult I have to say,” Trump said. “Maybe it will cost him the election, but it’s OK. He’s such a pain. When he needs something for Kentucky like money, like aid, like when he wants me to call one of the many manufacturers now that are coming into Kentucky.... I say Matt do I have to do it, please, please. But isn’t that really what you want him to do?”