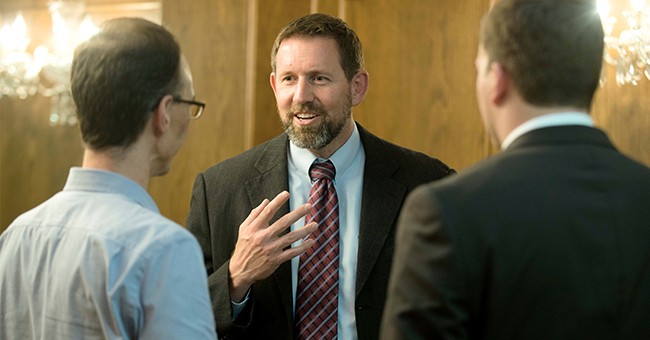 The American Bar Association did not give Lawrence VanDyke the seal of approval to sit on the 9th Circuit Court of Appeals. In fact, it's the ninth time the ABA has deemed a President Trump nominee "unqualified." VanDyke, the ABA admits, has 14 years of relevant experience, but it interviewed dozens of witnesses who say VanDyke's temperament is unacceptable. Not to mention his treatment of LGBT individuals.

"Some interviewees raised concerns about whether Mr. VanDyke would be fair to persons who are gay, lesbian, or otherwise part of the LGBTQ community," the ABA wrote to the Senate Judiciary Committee.

When Sen. Josh Hawley (R-MO) read out some of these accusations during VanDyke's hearing on Wednesday, the nominee broke down in tears.

Lawrence VanDyke brought to tears because of the shameful and false accusation by the @ABAesq that he holds animus toward the LGBT community. Thank you to @SenHawleyPress for highlighting this injustice. The ABA has lost all credibility for trying to destroy this good man’s life. pic.twitter.com/4ARyHvw3Zu

It took the nominee a few moments to collect himself before he continued.

"I did not say that," VanDyke said. "I do not believe that. It is a fundamental belief of mine that all people are created in the image of God. They should all be treated with dignity and respect."

By way of shaming the ABA and its accusations, Sen. Mike Lee (R-UT) asked VanDyke if he had any animus toward LGBT persons. The nominee responded, "not at all."

The ABA’s letter, Lee said, “had no apparent basis in fact.”

The Judicial Crisis Network sounded off on the ABA Wednesday morning too, noting that it had really "outdone" itself this time with its anti-conservative bias.

"The ABA has amassed quite the history of bias against conservatives over the last few decades, but with VanDyke, it has really outdone itself," said JCN chief counsel Carrie Severino.

"The American Bar Association’s subversive attack on Lawrence VanDyke should shock all Americans," General Counsel Hiram Sasser said in a statement. "This eleventh-hour attack and attempted character assassination of a brilliant lawyer was spearheaded by VanDyke’s former political opponent, and it should be rejected without further consideration. VanDyke defended America’s most cherished freedoms—including the dignity of the individual and the freedoms of speech, religion, and more—as a public servant and in private practice. Anyone who validates the ABA’s political smears is woefully ignorant of VanDyke’s qualifications and professionalism."