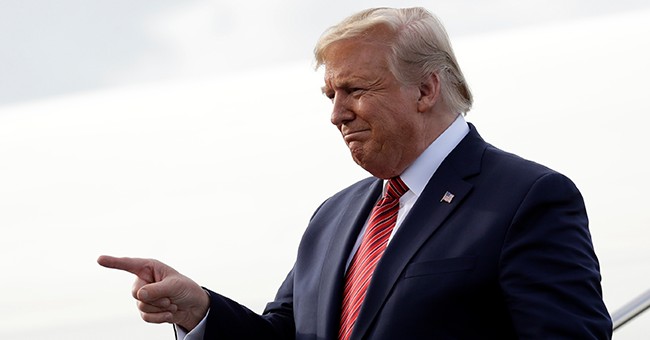 One of the controversies surrounding President Trump's MAGA rally in Minneapolis Thursday night is the city's decision to ban police officers from showing their support for him. A new policy prohibits off-duty officers from wearing their uniforms while they're endorsing a political party, candidate or campaign. Mayor Jacob Frey, who we already know does not want the president to visit the Minneapolis, explained the new policy in a press conference.

"The Minneapolis Police Department is neither a Republican nor a Democrat entity," he said. "It is non-ideological nor is it partisan. It is a neutral entity that is charged with ensuring the public safety of every single resident in the city of Minneapolis."

The Police Officers Federation of Minneapolis decided to respond by selling "Cops for Trump" T-shirts. And the first shipment sold out in a flash.

The first shipment of 300 shirts sold out by 11:00 a.m., but the police union expected that supply to be replenished by afternoon. The profits from the shirts will go to police and fire charities.

"There are people waiting, they’re signing up on waiting lists. We knew that it would do well. We didn’t anticipate this large of a demand."

At Minneapolis Police Federation these shirts are going fast.. New shipment expected later today. This is in response to city’s decision to enforce rules against wearing uniforms at political rallies pic.twitter.com/X4jeaytehf

President Trump sounded like he'd be happy to sport the shirt.

Thank you to Lt. Bob Kroll of the great Minneapolis Police Department for your kind words on @foxandfriends. The Police are fighting the Radical Left Mayor, and his ridiculous Uniform Ban. Actually, I LOVE the Cops for Trump shirts. Want to bring some home. I am with you 100%!!!!

Lt. Bob Kroll, the head of the officers’ union, said he spoke with Eric Trump earlier this week and is preparing to get POTUS some of the popular apparel. He's also expected to speak at Thursday's rally.

In other controversial news, Minneapolis officials, including Mayor Frey, are demanding the Trump campaign foot the $530,000 in security fees for Thursday's event at the Target Center. Neither side is budging.