Giuliani: Why The Ukraine Report Is a 'Positive' for Trump 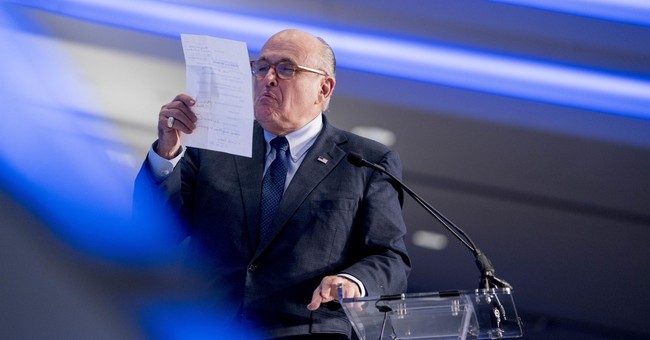 Trump critics pounced on the report as being potentially fatal to his administration. But Giuliani saw a positive takeaway from the headlines: If the media keeps hammering Trump about Ukraine, it will only put a brighter spotlight on Biden and his own Ukrainian scandal. Reportedly, Ukraine gave millions to Biden's son Hunter Biden via some "corrupt companies."

Did Obama know that his VP, the one he put in charge of giving billions to Ukraine, had a son who was making millions on the board of one of the most corrupt companies in Ukraine. Biden’s boss had stolen $5b from Ukraine and was a fugitive. Did Obama know? Did he approve?

Giuliani invited the media to go ahead and keep reporting on it because Trump will once again effectively "deflect the punch."

"There’s a lot more evidence I’m going to put out," the attorney promised.

As for whether Trump should respond to demands to send material to House Intelligence Committee chairman Adam Schiff (D-CA), Giuliani said absolutely not, especially after Schiff argued that the Ukraine report may be grounds for impeachment.

"Make it hard on these phonies," Giuliani said.

The attorney added that the Democrats need to investigate the Bidens instead. If they don't, there's no longer such a thing as "justice."

If Dem party doesn’t call for investigation of Bidens’ millions from Ukraine and billions from China, they will own it. Bidens’ made big money selling public office. How could Obama have allowed this to happen? Will Dems continue to condone and enable this kind pay-for-play?

Trump has said there was nothing untoward about his conversations with President Zelenskyto, yet he'd consider releasing the transcripts from their phone call.

“We’ll make a determination about how to release it, releasing it, saying what we said,” Trump said. “It was an absolutely perfect conversation. The problem is, when you’re speaking to foreign leaders, you don’t want foreign leaders to feel that they shouldn’t be speaking openly and good.”