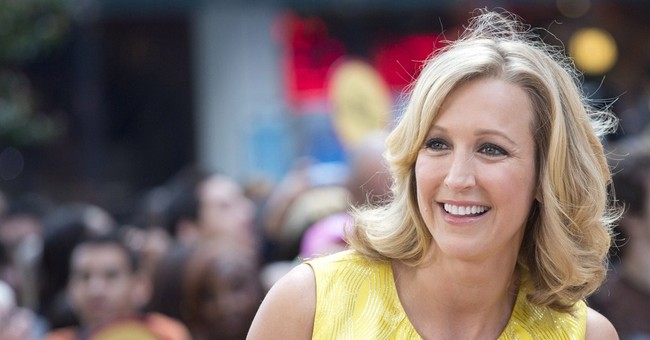 “Good Morning America” anchor Lara Spencer learned what the PC outrage mob is all about last week when she became their latest target. During one segment of Thursday's morning program, Spencer dared to poke fun at reports that Prince George, the firstborn son of Prince William and Kate Middleton, is enjoying his ballet classes. Spencer chuckled and said, “I have news for you Prince William: We’ll see how long that lasts.”

Celebrity dancers, one-by-one, issued statements and posted video messages expressing their disappointment in Spencer. Then a hashtag, #BoysDanceToo, took off.

As you can expect, Spencer issued an apology.

But that wasn't enough for critics because a group of male professional dancers, including "So You Think You Can Dance's" Travis Wall, showed up outside GMA's studio in Times Square on Monday morning and taught an all genders dance class, hoping Spencer would see it from the window.

In response to @LaraSpencer’s harmful mocking of a young boys (in this case, Prince George) who enjoy taking ballet classes, a group of professional male dancers led a class for boys and girls outside the @GMA studio this morning — a lovely sight to wake up to #BoysDanceToo pic.twitter.com/uqh7qLhNI8

Amidst the spectacle, Spencer was compelled to apologize again on air Monday morning.

“I screwed up,” she said. “I did. The comment I made about dance was insensitive, it was stupid, and I am deeply sorry.”

She then revealed she's taken steps to learn from her mistake.

"I’ve spoken with several members of the dance community over the past few days," Spencer explained. "I have listened. I have learned about the bravery it takes for a young boy to pursue a career in dance.”

This was so overblown. Clearly Spencer did not mean to offend or insult anyone. Perhaps ABC insisted she issue such an embarrassing statement because it’s the network that airs “Dancing with the Stars.” Former DWTS professional dancer Derek Hough even released a statement in which he noted that the anchor didn't mean to be hurtful, but that he's spent years trying to bury that kind of perception.

"The tone and mockery towards dance is just dated, old and not relevant anymore," Hough wrote on Instagram. "Those who mock don't understand."

I don't think Spencer was trying to be a bully. And there’s no reason why Spencer had to be put through such an embarrassing episode. In any event, why wasn’t Stephanopolous forced to issue his own apology? He was clearly heard laughing off camera too.