Trump Sounds Off on Sen. Brown, Dayton Mayor for 'Misrepresenting' Their Meeting 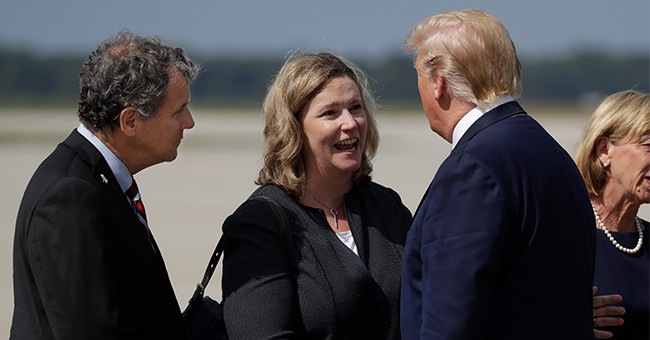 President Trump visited the community of Dayton, Ohio on Wednesday to pay his respects in the aftermath of Sunday's tragic shooting, in which nine people were murdered. He visited with patients at the Miami Valley Hospital and met with lawmakers like Sen. Sherrod Brown and Dayton Mayor Nan Whaley. Although both leaders had hesitated about welcoming him, they agreed it was best they meet with him - whether for the sake of unity, or an opportunity to confront him about some next step action items.

Almost as soon as Trump was out of their sight, however, the Democrats gave a press conference about what took place inside the hospital. Whaley and Brown noted that Trump had been "received well" by patients and staff, but they also said that they urged the president to act on gun control. Brown specifically said he tried to convince Trump to get Senate Majority Leader Mitch McConnell to reconvene Congress so they can vote on some gun control measures. He also supposedly asked Trump not to touch Obamacare or to cut Medicaid, because the program is necessary when tackling mental health issues. Brown then proceeded to attack Republicans as "doing the bidding of the NRA."

The president was appalled that the pair had "misrepresented" what had taken place in Dayton.

....misrepresenting what took place inside of the hospital. Their news conference after I left for El Paso was a fraud. It bore no resemblance to what took place with those incredible people that I was so lucky to meet and spend time with. They were all amazing!o

Whaley saw the tweet and appeared confused because, she noted, she and Brown had told reporters that he was "received well" by the hospital he visited.

When the Mayor of Dayton first saw @realDonaldTrump tweet about her pic.twitter.com/Z8YdyeebXp

But White House Press Secretary Stephanie Grisham was similarly offended by the Democrats' narrative, particularly what they had not said - that the shooting victims and hospital staff were "happy" to see the president.

President @realDonaldTrump graciously asked Sen Brown & Mayor Whaley to join as he and the First Lady visited victims, medical staff & first responders. It is genuinely sad to see them immediately hold such a dishonest press conference in the name of partisan politics. https://t.co/BB0lXhfBnG

Trump headed straight to El Paso, Texas after his visit in Dayton, to spend time with a second community in mourning.  A mass shooter killed 22 people in a Wal-Mart on Saturday, two of whom died on Monday from their injuries. His second trip was another chance to unify the left and right, but there, too, he found several officials who refused to even meet with him.